Does the eighth-generation Rolls-Royce Phantom merit the 'best car in the world' title? 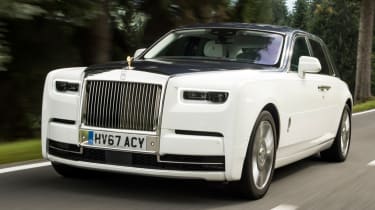 Rolls-Royce has launched its eighth-generation Phantom, a luxury car like no other, redeveloped from the ground up to be quieter, even more luxurious and better in every conceivable way than its illustrious predecessor. It has delivered on those promises while infusing its new range-topping saloon with real character and a level of personalisation that will blow its buyers away.

Rolls-Royce doesn't launch a new car very often, which makes the arrival of a brand-new-from-the-ground-up Phantom all the more momentous. Rolls set its engineers and craftspeople the unenviable task of improving on the outgoing model, to create the best for those with the means to afford it.

The entry-level price of about £300,000 is only the starting point, as buyers can choose from a seemingly endless list of customisation options, ensuring that no two Phantoms are likely to be the same. Unless of course, you buy more than one.

That starts with the new car's exterior. While the previous model's imperious presence and grand elegance are retained, the new Phantom is more flamboyant in its detailing. Sharp new LED-rimmed headlights with laser high beam add a technical edge to the front, where the wider 'plinth' radiator grille is more integrated with the bodywork surrounding it. 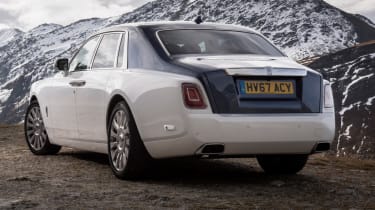 Upright front wings result in a square-jawed look that is further emphasised by the fitment of 21- or 22-inch alloy wheels – both featuring 'RR' badges at their centre, which, like before, always remain the right way up. Depending on colour, the Phantom's rear haunches are more defined than before, giving it a touch more muscularity and stance, assisted by the chamfered appearance of the rear bumper.

As on the old car, the rear doors are hinged from the back and they house umbrellas. Once seated inside, the rear passenger can close the door at the touch of a button, or have their chauffeur do it from outside the car. It's wonderfully quiet and smooth in operation, creating a distinctly quiet cabin that's isolated from the outside world.

The carpets are deep and the leather soft, as you'd expect, and elsewhere, Rolls-Royce has managed to bring its infotainment and communication technology up to date while further enhancing the bespoke luxury feel of the Phantom. The switchgear is a joy to use, from the chrome organ-stop air vents to the unique rotary temperature dials; it's nigh-on faultless.

In spite of a reduction in overall length, a brand new aluminium platform has enabled Rolls-Royce to increase interior space. Even the standard Phantom has ample legroom for those in the back, while the Extended Wheelbase variant is simply cavernous. 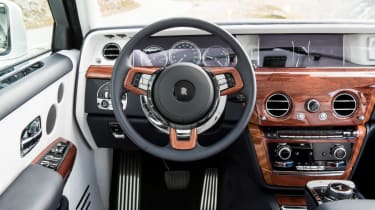 But that's not the only thing that will grab buyers' attention, as Rolls-Royce has come up with an ingenious way to allow its customers to customise their Phantom. A single piece of glass extends the width of the dashboard, covering the simple digitally rendered instruments and what bosses call 'The Gallery'. This sculpted section swoops behind the retractable infotainment screen and can be treated like a blank canvas for buyers to commission bespoke finishes from artists or choose from several that Rolls-Royce has already created. It is unique and gives a clear indication of the sort of buyer that tends to choose a car such as this.

And while the rear of the cabin is a great place to while away the hours, Rolls-Royce expects more of its Phantom buyers than ever before to drive the car. The standard wheelbase model even has a slightly more driver-focused chassis set-up to that end, though there's nothing so crass as a Sport mode or gearchange paddles.

The Phantom does, however, gain four-wheel steering to aid low-speed manoeuvring, agility and high-speed stability. It can turn around in a surprisingly tight space given its size. Air suspension and active roll management are also included, all calibrated for ultimate comfort. It delivers that in spades, vying for 'most comfortable car on the road' honours. Not only does it absorb speed bumps and railroad crossings with aplomb, the active roll system prevents unseemly lurching of the body through the corners. 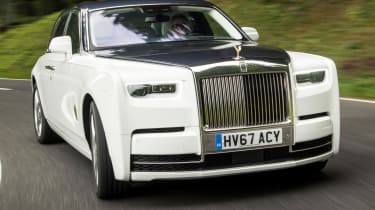 For such a large and heavy car, it comports itself well, though stops short of being what could be construed as sporty. Instead, it fields surprisingly wieldy, even through busy city streets and confined spaces.

On the open road, it's a joy. A new 6.75-litre twin-turbocharged V12 petrol engine is rarely audible and it has been tuned to produce all its meaningful performance at low engine speeds – feeling effortless in its power delivery. Enhancing that is the exceptional eight-speed automatic transmission. Rarely do you feel a gear change. Rolls-Royce has been obsessive in its pursuit of interior silence, as well. Thanks to considerable extra sound-deadening material (including special foam in the tyres), the new Phantom is much more hushed than the old one, which was already claimed to be quieter than any comparable car.

Arguably, the Phantom has no peers in the car world, which is why its maker refers to it as a “luxury good”, something that the very wealthy are as likely to buy as a new boat or a chalet in the Alps. Just as well a new one doesn't come along too often then, isn't it?