There's an atmosphere of real excitement and expectation as Saab's engineers and designers gather at our photo location for the arrival of the 9-3 Sport-Hatch. 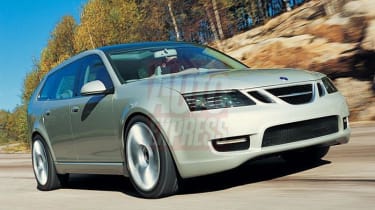 The 9-3 Sport-Hatch will make a worthy addition to the compact executive estate market, and our short drive proved the newcomer has real potential. But much of the competition will have evolved by the time the car appears in 2005. Let's hope Saab doesn't arrive too late to the party.

There's an atmosphere of real excitement and expectation as Saab's engineers and designers gather at our photo location for the arrival of the 9-3 Sport-Hatch.

Although the innovative estate was only unveiled weeks ago at the Frankfurt Motor Show, and is shortly heading to Japan for the Tokyo exhibition this month, Auto Express has been invited to drive the newcomer. No one will admit it, but damaging this prototype now would be a catastrophe...

The Sport-Hatch is crucial, say the officials, because it is the first and last of its type. It's the first compact executive estate the Swedish firm has ever built, and it's all been done in-house. And, following the introduction of the saloon and cabriolet, it's the final evolution of the current 9-3 range.

Aimed at challenging the likes of the Audi A4 Avant, BMW 3-Series Touring and forthcoming Volvo V50, the 9-3 Sport-Hatch is set to go on sale by mid-2005, and is expected to look virtually identical to the well proportioned machine you can see here.

Inside, the vehicle is every inch the fanciful concept, complete with a four-seat layout, LCD instruments and hi-tech Internet connections. The prod-uction version will feature a more conventional cabin, although Saab tells us that much of the "architecture" will remain. The car will also offer an impressive 1,350 litres of boot space.

Powered by a tuned 250bhp 2.0-litre turbocharged engine, the Sport-Hatch gives impressive performance. A five-speed Sentronic +2 gearbox provides automatic and manual options, although we left it in auto mode. Driving the prototype feels very similar to our first experience of the four-door 9-3. There's a fantastic view of the road ahead, and the Recaro seats front and rear are extremely comfortable.

The concept does hold a few surprises, though. With 20-inch wheels, it has the turning circle of an ocean liner, while there are all manner of squeaks and rattles from the hand-built interior.

However, this prototype (which took only nine weeks to build) has not been put together to impress us with its road manners. It's here to introduce us to the idea of an all-new Saab, one which the manufacturer hopes will significantly increase sales across the board and evolve the brand's family look.