No car maker can succeed today without a top-quality diesel engine in its line-up. 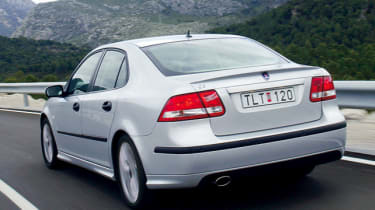 Saab desperately needs this engine in Europe. Well up to class standards in terms of refinement and economy, the TiD should deliver a big boost in sales. The new six-speed auto box suits the unit well, but there's a significant tax and economy penalty to pay if you opt for the self-shifter over the perfectly acceptable six-speed manual.

No car maker can succeed today without a top-quality diesel engine in its line-up. Saab has long lagged behind in the oil-burning race, with the 9-3 using the old and rattly 2.2-litre powerplant from parent company GM. This unit had been carried over from the previous Vauxhall Vectra, and lacked both the performance and economy of the engines used by the Saab's competitors.

But all that is set to change with the launch of the new 9-3 1.9 TiD in September. There will be two different versions of the common-rail oil-burner, which is produced in Italy by engine builder GM-Fiat Powertrain.

The entry-level variant is an eight-valve unit that develops 120bhp and 280Nm of torque. Meanwhile, the 16-valve version is good for 150bhp and 315Nm. According to the maker's provisional figures, the CO2 emissions for both models are virtually the same at 157g/km and 159g/km respectively.

What's more, the units fall into the 17 per cent company car tax bracket. That's because they comply with Euro IV exhaust regulations and, unlike many rival models, they have a particulate filter fitted as standard.

All versions of the 9-3 1.9 TiD come with a six-speed manual gearbox as standard. However, the Swedish manufacturer is also offering the option of a six-ratio automatic transmission with wheel-mounted thumbshifters. Started from cold, there's perhaps a little more rattle and thrum than might be expect-ed from a state-of-the-art diesel, but as the car gets underway and warms up, this noise soon diminishes.

We tried the punchier 150bhp version on country roads, and found it to be swift and easy to drive quickly. The 9-3's passive rear-steer self-adjusting suspension gives impressive agility for a conventional front-wheel-drive machine, yet despite the firm handling the ride remains compliant. The previously sticky shift action of the manual transmission has also been improved, and it's now much easier to keep the powerplant on the boil. But as with most diesels, the TiD engine is at its most impressive when tackling fast, sweeping roads and motorways - here, the steady stream of pulling power only serves to underline why oil-burners have become so incredibly popular on today's market.

We also tried out the new auto. On congested carriageways, the ability to change gear with the flick of a thumb makes progress even quicker and more smooth. In a manual diesel, lifting the throttle to swap cogs can lead to the engine 'dropping off' the torque curve and momentum being lost - but the self-shifter alleviates this brilliantly.

The biggest drawback in going for the automatic is that it results in increased CO2 emissions - which rise to 194g/km. What's more, fuel economy falls to 39.4mpg, stripping the 9-3 TiD of its tax benefits and economy.