Times aren't good for Saab. The Swedish firm has struggled to turn a profit over the past few years, and its fortunes have floundered under the ownership of General Motors - it's clear that a UK product range based on only two cars hasn't helped 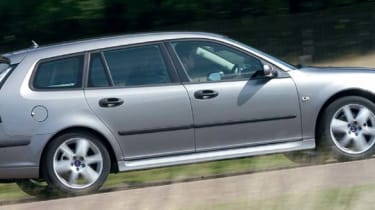 It's been a long time coming, but the Sportwagon is worth the wait. Good looking, practical and relaxing to drive, it's a superb addition to Saab's range. Buyers who want lots of room should look elsewhere, but factor in the excellent diesel engines and competitive pricing, and the Sportwagon should prove popular.

Times aren't good for Saab. The Swedish firm has struggled to turn a profit over the past few years, and its fortunes have floundered under the ownership of General Motors - it's clear that a UK product range based on only two cars hasn't helped.

Plans for a BMW 1-Series rival are still on the back-burner, and the 9-6x SUV isn't due to arrive until next year. In the meantime, hopes rest on the 9-3 Sportwagon, which appears in showrooms here this month - and Auto Express has driven it first.

While the current 9-3 is certainly a handsome machine, the styling of the new estate is much more distinc-tive. With smart 'hockey stick'-shaped C-pillars, an integrated roof spoiler and LED tail-lights encased in frosted plastic covers, it stands out from the crowd yet manages to look subtly cool at the same time. But is this machine as practical as it is good looking?

As with any mid-sized premium estate, space is not the main priority for the Saab. If it's real carrying ability you are looking for, a proper load-lugger such as a Vauxhall Vectra will be the better choice every time.

However, at 419 litres with the seats up and 1,273 litres when folded flat, the Sportwagon offers more outright room than Audi's A4 Avant - although it's not as big as the BMW 3-Series Touring. One pull of a neat handle, and the boot floor can be folded away to reveal a recessed stowage area which further boosts practicality. What's more, intrusion into the space by the rear wheelarches is minimal.

The 9-3 saloon's range of GM/Saab-developed engines appears under the bonnet. Of these, the 150bhp 1.9-litre TiD turbodiesel tried here is likely to be the most popular. Gutsy, economical and smooth, it's a fine powerplant. As for the rest of the driving experience, the 9-3 Sportwagon rides comfortably and feels agile. It's not an enthusiasts' car like the A4 or 3-Series; instead, it plays the role of a refined cruiser.

That's backed up by comfortable, sculpted seats and a good driving position, although the cabin could be more solidly built - there was loose trim on our car. And we wish that Saab would use more colours, rather than opting for different shades of grey.

Carrying a price premium of £1,000 over the four-door, the Sportwagon is expected to be the Swedish company's best-selling model. We don't doubt that - Saab desperately needs a good car, and this new load-lugger should help ease its current situation.