Will car firms ever get bored with dreaming up catchy yet indecipherable tags for their latest creations? We've already had the MPV (Multi Purpose Vehicle), the SUV (Sports Utility Vehicle) and even an SAV (Sports Activity Vehicle). 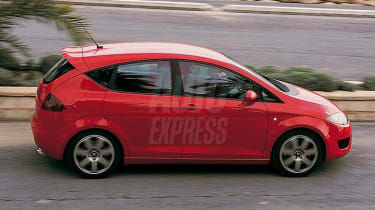 The Altea's dramatic looks could divide opinion and the lack of removable seats is a disappointment. SEAT says it wants to attract 30-something buyers with one or two children, who need space but aren't ready to give up driving pleasure. Only time will tell whether MSV becomes as familiar a phrase as MPV or SUV.

Will car firms ever get bored with dreaming up catchy yet indecipherable tags for their latest creations? We've already had the MPV (Multi Purpose Vehicle), the SUV (Sports Utility Vehicle) and even an SAV (Sports Activity Vehicle). Now SEAT is getting ready to unleash the Altea MSV (Multi Sport Vehicle) - and Auto Express has driven it first!

The car is SEAT's new big idea, and will be unveiled at the Geneva Motor Show next March, before arriving in the UK early in the summer. Inspired by the Salsa and Salsa Emoci�n concepts, it's based on the same chassis as the latest Audi A3 and Volkswagen Golf. Although the five-door Altea is aimed at practical machines such as the Ford Focus C-Max, bosses at SEAT say that it's intended to be the sportiest midi-size people carrier on the market, and aims to prove it with big wheels and stylish bodywork. Our test car is in top-of-the-range Cupra guise, so it gets an aggressive front bumper and mesh air intakes, a big tailgate spoiler and 19-inch alloy wheels borrowed, believe it or not, from the VW Phaeton.

It's a convincing design, but disappointingly the Altea won't get the Alfa-style rear door handle that's hidden in the window frame; a conventional item is earmarked for production models.

At the front, the innovative system which lets the wipers park in an up-right position against the windscreen pillars will be a feature. Settle in behind the wheel, and you can see what Altea designer Steve Lewis means when he says: "The Altea is the first in a series of radical mid-range SEATs and should make motorists feel as though they are driving a coup�." You sit higher than in a Golf, but the Altea feels far less van-like than, say a Vauxhall Zafira. The new dash design is a triumph, with a sporty yet classy look. We won't get the aluminium detailing, but otherwise the cabin pictured here is the real thing.

Despite being the same length as a Leon, the Altea has a superb amount of rear legroom and lots of headroom. The Cupra front seats are comfortable and the steering wheel has a pleasingly thick rim. In production cars, the individual rear seats will be replaced by a bench that folds forward to give a completely flat loading bay. Under the bonnet is the VW Group's 150bhp 2.0-litre FSI petrol engine, but the production Cupra model will have a hot diesel engine. On the road, the Altea feels unique. As a sister brand of Audi and Lamborghini, SEAT is expected to produce sharp-handling cars. So company engineers specified their own chassis settings. As a result, the MSV is firmly sprung, with stiffer suspension bushes and sharper steering responses than you'll find on the new VW Golf.

But the Altea is an unusual mix. Although it's spacious, it lacks MPV versatility. And will the tall body and high driving position work with a sporting chassis? More controversially, the hottest Altea will be diesel powered. We wonder what UK drivers will make of it.