SEAT's Ateca SUV gets a bit sportier in FR trim but is that a good thing? 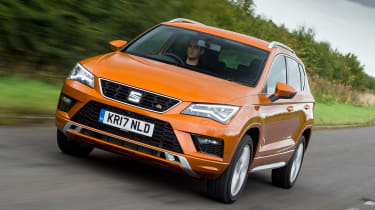 SEAT is following the lead of BMW and Audi by throwing a selection of sporty trinkets at its first SUV. It’s mainly a marketing exercise, but as the Ateca was already one of the best cars in its class to drive, the FR’s lowered suspension struggles to offer any discernible benefit to the handling. We’d save some cash and opt for the SE Technology car, or wait for the forthcoming Ateca Cupra for the full sporting SUV experience.

SEAT has big plans for its new high-performance Cupra sub-brand and among the rumoured new models will be a 300bhp Ateca Cupra, complete with lowered suspension and four-wheel drive. Until that car arrives, however, SEAT bosses have plugged the gap with a sporty-looking FR trim – offering more aggressive body styling, lowered suspension and colour-coded cladding. But is this version worthy of its hiked price? We’ve driven it in the UK for the first time to find out.

Slotting into the range just below the plush Xcellence flagship, the FR commands a premium of around £1,000 over the equivalent SE Technology model. It’s available with 1.4 or 2.0-litre turbo petrol engines, as well as a pair of 2.0 TDIs.

The FR gets stiffer springs and a 15mm drop in ride height compared with the standard Ateca. That makes it marginally firmer over rough surfaces and a little more fidgety on all but pan-smooth tarmac. A Peugeot 3008 is more comfortable – even in GT-Line spec. The thing is, the Ateca was a fine-handling car to begin with, and the FR tweaks do little to improve the way it drives. 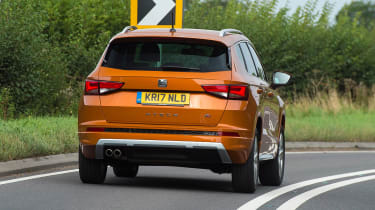 The FR steers as sweetly as always, with very little body roll and plenty of grip. The normal car’s already-stiff structure makes it fun to drive, while the supportive seats hold you in place on twistier roads. Thankfully, our test model was on the standard 18-inch wheels, rather than the optional 19-inchers, resulting in a relatively quiet ride. We’ve yet to try the bigger rims, but expect they may have an adverse effect on refinement.

SEAT has also given the FR adjustable drive modes, although adaptive dampers aren’t part of the package. In Sport mode, the Ateca benefits from weightier steering and a more responsive throttle, while cars fitted with the DSG auto get a revised shift pattern. The changes are slight, but Normal mode offers the best overall compromise.

Our car came with the tried-and-tested 148bhp 1.4 TSI, linked to SEAT’s excellent six-speed manual gearbox. The set-up is as quiet here as it is in any of the Volkswagen Group’s models, ticking along without so much as a murmur at idle. It’s not the most tuneful engine as you rev it out, but it packs plenty of punch – and despite its modest torque figure, it will breeze past slower-moving traffic on the motorway. 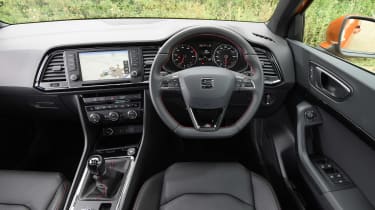 Quality is as solid as ever, but cabin changes are limited to an FR badge on the steering wheel and some multicolour ambient lighting on the doors. It’s not a striking design, but it’s functional and well laid-out, and everything is easy to use. Options like wireless phone charging, a top-down camera and handy self-park function continue to cement SEAT’s place among the tech leaders in this segment.

Those taken by the sportier styling and lowered suspension, though, will be pleased to hear the changes have no effect on fuel economy and emissions. That means the 1.4 EcoTSI FR will emit 123g/km of CO2 – and thanks to cylinder deactivation tech it claims 52.3mpg. The system functions seamlessly, too, with the only indication it’s working being a small illumination on the dashboard.