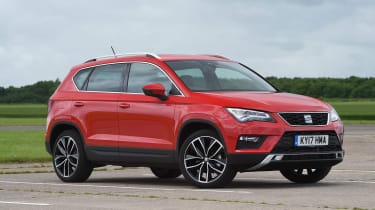 The Ateca has been a hit for SEAT, and it’s easy to see why. When it arrived in 2016 we named it Best Crossover in our New Car Awards, having given it the full five stars in our review. At the time we said: “It offers all that is great about the Leon in a superb-looking new package, and blends excellent performance with decent practicality and strong value for money. It’s a compelling new crossover option for buyers.” Buyers have also taken to the Ateca, and its popularity means there’s no shortage of models to choose from on the used market. We found more than 500 of them for sale, with a wide choice of engines, trims, colours and mileages, so there’s bound to be an Ateca out there with your name on it.

It took SEAT a long time to find its feet in the UK, having arrived here back in 1985. For years a mixture of so-so cars and uncertain market positioning hampered the efforts of this Volkswagen Group offshoot, but the turning point came in 2008 with the arrival of the fourth-generation Ibiza. Since then we’ve had a run of sharply styled cars that have been good to drive, well equipped, generally reliable and usually good value.

However the making of SEAT was the success of the Leon hatchback, followed by a series of great-looking, on-trend SUVs that have been flying out of showrooms. The latest (and largest) is the Tarraco, and before that was the smallest, the Arona, but the first was this, the talented mid-sized Ateca. 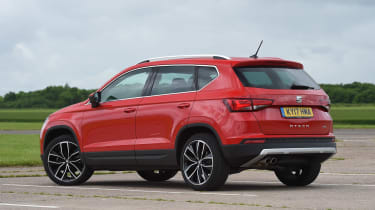 None of the car’s engines or transmissions needs to be avoided, because they all give a decent blend of performance and economy.

Equipment levels are generous. Even the entry-level Ateca S has 16-inch alloys, a five-inch touchscreen and air-con, plus electric windows front and rear. However, there are very few of these on the used market.

You get 18-inch alloys, LED headlights and nav with SE Technology, while Xcellence adds tinted windows, leather trim, heating for the front seats, headlight washers, a rear camera, plus automatic lights and wipers.

Alternatives to the SEAT Ateca

Thanks to the exploding SUV market, you’re spoiled for choice here. The Volkswagen Group alone offers three alternatives in the form of the Audi Q3, Skoda Karoq and VW Tiguan; uniquely in this segment, the Tiguan comes in seven-seater form if you opt for the Allspace variant. These VW Group models share the same engines and transmissions, while the infotainment systems and other interior parts are common across the model ranges. 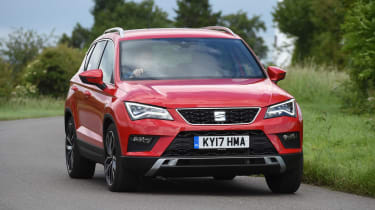 Away from the might of VW, the Ford Kuga is plentiful, good value and enjoyable to drive, while the Mazda CX-5 is stylish, features a superb interior, and arguably has the sharpest handling in this class. The Hyundai Tucson and its Kia Sportage cousin combine quality, value and reliability to great effect, while the Peugeot 3008 has a plush cabin and neat handling.

Atecas with the 1.5-litre petrol engine can judder in first gear, but a software update can be installed to improve things.

Rattles from inside the dashboard aren’t unusual on the Ateca, and unfortunately dealers can find these problems hard to fix.

Check the lower rear corners of the back doors for paint damage. Mud and debris can build up in these areas quite badly.

All Atecas came equipped with a mobility kit instead of a spare wheel, but if you buy one, a space saver will fit in the boot well.

SEAT has done a great job with the Ateca’s packaging; its cabin isn’t short of space (there’s room for three adults in the back seats) yet the boot is big too; with the rear seats up it’ll stow 510 litres, although four-wheel-drive models only take 485 litres. The VW Group dash features excellent infotainment, high-quality switchgear and clear graphics, so whichever model you buy, it’ll be user-friendly. 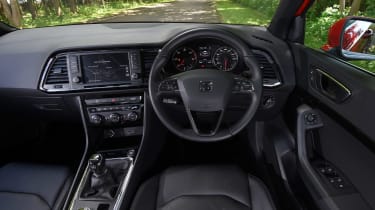 Owners pick fixed or variable servicing. The former is set at every 9,300 miles/12 months, and the latter gives up to two years/18,600 miles between pit stops.

Services alternate between minor (£175) and major (£295), plus £49 every two years for brake fluid, and around £400 for a new cambelt on all engines except the 2.0 TSI. Diesels need a new cambelt every 130,000 miles; there’s no set interval for the petrol units. SEAT dealers offer a used-car service plan for £26 per month.

The Ateca has been recalled nine times, first in January 2017 for rear hub failures on four cars; two more were recalled in December 2018 for head-restraint issues, and 50 SEATs were recalled in May 2019 for airbags. Larger recalls were caused by electronic parking brakes, central rear head restraints, indicators, headlight levelling, issues with passenger-seat frames, and stalling.

The Ateca made its Driver Power debut in our 2018 New Car Survey, in 37th place. It followed that up with a 60th place last year, a position that was out of 75 cars. The highest scores were for rear legroom and boot space, while the brakes and visibility got a thumbs up too. Disappointingly, the lowest scores were for quality, refinement, comfort and handling.