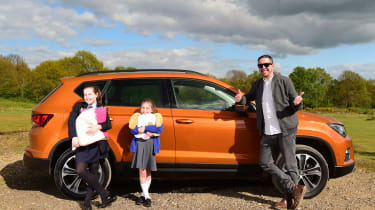 The SEAT Ateca’s proven itself worthy of its New Car Awards success. It has a firmer ride than its rivals, but it’s still a comfortable, spacious car that’s great to drive. The gruff engine is the only downside, yet it’s been economical in our hands. So although this is a tough class, the SEAT has shown its strength.

As one in-your-face orange car arrives on the Auto Express fleet, we’re saying goodbye to another. Nearly nine months and 8,124 miles have passed since we took delivery of our SEAT Ateca. It joined us as the reigning Best Crossover at our New Car Awards, so has our time with the car reinforced our opinion or highlighted any shortcomings?

It’s a little bit of both, but I’m glad to say it’s more of the former, as the Ateca has proven the consummate workhorse. Crossovers such as the SEAT should seamlessly integrate into family life, and from day one the Ateca offered all the space my family and I could want. It transported my photography kit, cleaning gear and took us on family holidays. 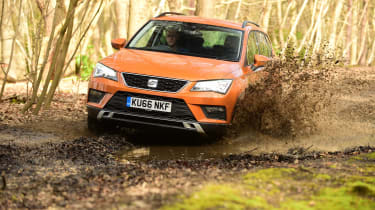 This is where it fell down slightly compared to my previous test car, the Renault Kadjar. The Ateca knocked the Kadjar off top spot in our awards thanks to its blend of abilities, but it wasn’t quite as comfortable. My kids pointed this out early on and continued to highlight the firmer and slightly unsettled edge to the SEAT’s ride – one of my daughters even sat on some cushions to, well, cushion the blow.

Having ridden in the back to test their claims, I can report that it definitely does feel firmer than the Renault, jiggling over bumps a little more. But it’s much better to drive than the Kadjar. The steering is sharper, that firm ride is an indicator of its superior body control, the gearshift is much slicker and the engine is just as punchy, even if it is fairly gruff when worked hard. The 1.6 TDI Ecomotive proved economical enough, though, averaging 46.8mpg overall.

The orange paintwork divided opinion in my household and it had the wrong effect on one pedestrian, who decided to dent the SEAT’s door. I also recently picked up a puncture that made me wish I’d specified the space saver spare wheel, too. 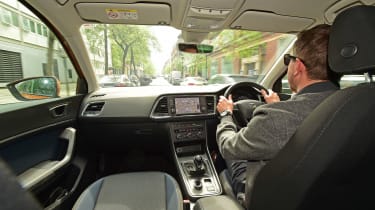 But by far the biggest annoyance I found was the Ateca’s boot. I’m always going in and out of the load bay to store and get out camera gear, so the fact that when I slammed the tailgate shut it would bounce off its latch proved really irritating.

I’d often drive down the road only for the trip computer to show the boot wasn’t properly shut. SEAT looked at the problem and it seemed to improve for a brief period, but the niggle never fully went away.

Even this couldn’t detract from the car’s impressive all-round performance, though. Over the past nine months the Ateca’s seen off challenges from a host of new arrivals, including the Toyota C-HR, proving that nearly one year on from winning our New Car Awards, it’s still at the sharp end of the sector. 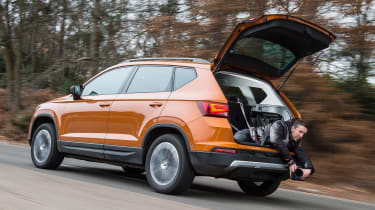 Practical, smooth-riding SEAT Ateca SUV is a fine companion for our photographer

As Auto Express’s senior staff photographer, I put my fleet car to work more than most – which is why the choice of model I run is an important one. I’m usually darting around the country travelling from shoot to shoot, so something economical that’s large enough to swallow all my photography gear, plus has a comfortable ride, is generally preferable.

In 1.6 TDI Ecomotive form, the SEAT Ateca certainly ticks the first two boxes. I’ve been averaging 45.7mpg over the past few months, while the boot is big enough to carry my kit – and, as the picture here shows, on occasion, me. However, this is where my slight issue with the ride comes in.

If you’ve ever wondered how we get the shots of moving cars in Auto Express, they’re taken from a tracking vehicle – usually the Ateca. At our test venues, I can jump into the boot or shoot out of the door or side windows, and a soft suspension set-up is generally preferable to ensure I get a pin-sharp image.

However, the Ateca is on the firm side. It’s not uncomfortable, as body motion is nicely damped by the taut-feeling suspension, but there’s more feedback through the chassis than in its rivals. Still, there are benefits to this when we leave the test track and hit the road. For a tall crossover it handles sweetly; plenty of cars such as the new Peugeot 3008 have challenged the SEAT for supremacy on the tarmac and lost; it’s that good to drive. 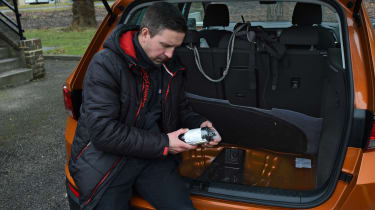 It feels like a slightly raised Leon, with the same precise steering and body control as SEAT’s family hatch. Even with the dampers’ tighter control, the huge 510-litre capacity means I can easily get comfortable in the boot. That’s not a phrase you’ll hear too often, and while most people judge load space by how many suitcases they can squeeze in, if a car can accommodate my frame in a photography harness and still give me enough space to shoot, it’s definitely practical. The SEAT scores highly here.

Recently, though, I’ve been experiencing the firm ride a little more acutely than I’d have hoped, as the tyre pressure-warning system pinged an alarm highlighting I had a flat. Granted, this wasn’t the car’s fault, but without the £110 optional space-saver spare, there’s only an inflation kit under the boot floor. I was reluctant to use expanding foam for fear of damaging the rim, but thankfully there was enough air in the tyre to allow me to limp to the nearest garage for a repair.

It’s the only real hiccup I’ve experienced with the Ateca so far. Thanks to some clever storage features, such as a drawer under the driver’s seat, it’s balancing work and family life nicely. Long may this continue. 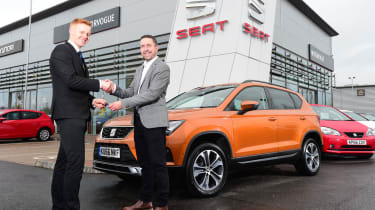 Crossovers are core family cars. UK motorists buy them in their droves, and at Auto Express we’ve tracked the amazing growth in this market right from the start to the point where, in our opinion, the SEAT Ateca is now the best example of the breed on sale today.

It picked up the Best Crossover crown at the Auto Express New Car Awards back in July, which meant we simply had to have one on our fleet to experience what it was like to live with over a longer period. 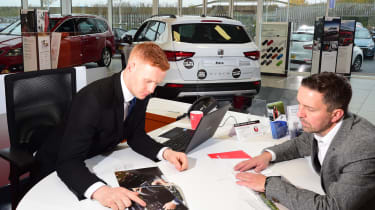 I must admit, I’m not a big infotainment buff, but even I’ve been finding the system useful, as it’s easy to pair your phone up. Travelling the country to snap pictures for Auto Express, I’m always plumbing new destinations into the nav, and I’m pleased to report that doing so is a simple task in the SEAT. I’ll be exploring the car’s Android Auto capability more in the future as well.

It was going to take something special to follow up the brilliant Renault Kadjar I was running before, but since I’ve swapped the keys, I’ve warmed to the Ateca’s charms.

For a start, it’s much more car-like to drive than the Kadjar. SEAT is known for its sportier approach and this is definitely reflected in the Ateca. 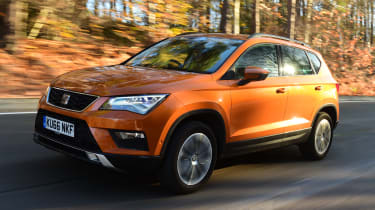 Despite its lofty ride height, it still handles with more precision than some family hatchbacks. It feels very positive on the road, with pointy steering and great body control – but as my wife and children have noted, this does hamper ride comfort a bit. It’s far from knobbly or jittery, but the firmer set-up is noticeable following the Renault.

However, the good body control means you can make the most of the engine – and it feels strong compared with the Kadjar. The 113bhp 1.6-litre TDI diesel pulls well, but sounds coarse when you rev it. Still, with 250Nm of torque it’s not always necessary if you want to whisk the family along in more refinement.

While the £575 Samoa Orange metallic paint finish might not be to everyone’s taste, I really do like the Ateca’s sharp lines. You could criticise it for looking a little like a jacked-up Leon, but when SEAT’s family hatch is as attractive as it is, there’s no shame in the Ateca borrowing some design cues. 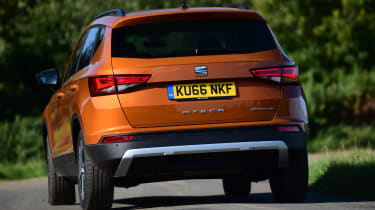 There are some neat touches, too, like the puddle lights in the wing mirrors that project a silhouette of the car on to the ground below. They’re teamed with £820 full LED headlights on our car. These cast a cool white glow far into the distance at night, and are a big help now the days are short and I’ve been driving in darkness a lot.

However, it hasn’t all been plain sailing for the SEAT since I picked it up. It’s already had to be returned to the dealer to have its tailgate looked at; the bootlid wouldn’t latch properly when swinging it shut. 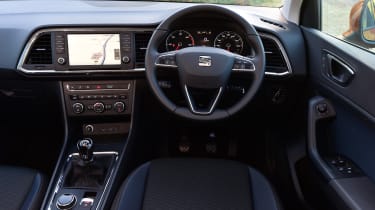 Aftersales manager Robert Coleman told me that the lock didn’t have much lubrication on it, so a dose of grease has improved the issue – although the £765 optional electric tailgate that opens with a swish of your leg would be preferable.

Still, once it’s open, the 510-litre boot is a great shape and very practical, swallowing all of my photography gear with ease.