We drive the range-topping SEAT Ateca FR 2.0-litre TSI in anticipation of 296bhp Cupra model due later this year 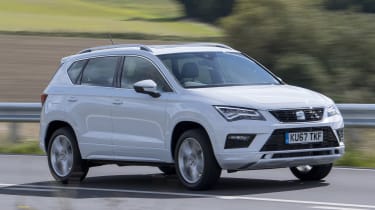 While this top-spec model whets our appetite for the forthcoming Ateca Cupra, we’d hold out for the real deal. SEAT’s first SUV has always been among the best in its class to drive, but this engine feels lacking – especially mated to the slow DSG box. It’s fine, but fundamentally flawed; other Atecas offer more, for less.

SEAT now offers its Ateca SUV with a choice of six engines, two gearboxes and either front or four-wheel drive. On top of that there are five trim choices and countless equipment packages, and if that’s not enough, there’s a 296bhp Cupra version on the way, too.

Those wondering what a fully laden, top-of-the-range SEAT SUV would look like should search no more – as the car you see here is exactly that. Fitted with the most powerful 2.0 TSI petrol engine, a DSG gearbox and 4Drive all-wheel drive, it comes packed with loads of clever kit and convenient features.

The flagship motor is available either in XCellence or FR trims. The latter was added to the Ateca range last summer, and endows the SUV with a sportier stance, stiffer suspension and a lower ride height, as well as body coloured bumper cladding and 18-inch alloy wheels. It’s actually £330 less (or a couple of quid per month) less than the XCellence, but still comes with LED lights, Alcantara seats and an eight-inch media screen. 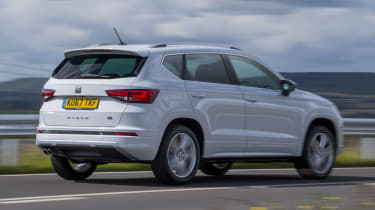 But until the aforementioned Cupra arrives later this year, this 187bhp car is the closest we’ll get to a hot SUV from the Spanish brand. Does it bode well for the firm’s first standalone sport model, or is SEAT better off sticking to its bread and butter?

First impressions are mixed. While it won’t set your trousers on fire, the 2.0 TSI offers an adequate turn of pace – sprinting from 0-62mph in a respectable 7.9 seconds. Like many of the VW Group’s more expensive models, however, the DSG gearbox holds it back, ensuring it feels slightly slower than the figures suggest.

In fact, the 148bhp 1.4 TSI manual we tried previously felt just as quick despite its power deficit and substantial price advantage. That car does 0-62mph in a still sprightly 8.5 seconds, while its manual gearbox made it more predictable – especially around town. 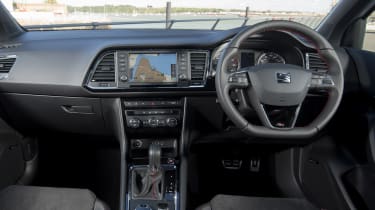 Pleasingly, however, both the 1.4 and 2.0 are good to drive, with precise steering, very little body roll and decent refinement. The ride is a little firm – especially compared to rivals like the Peugeot 3008 GT Line – but it’s far from uncomfortable. If you like your crossover to handle like a coupe, the grippy 4Drive-equipped SEAT is a top pick.

On the motorway, the 2.0 TSI settles into a hushed cruise with no noticeable noise from under the bonnet. There’s plenty of adjustment in the supportive sports seats, while visibility is good, too. Of course, the roomy cabin is unchanged, with enough room for four adults to sit comfortably for prolonged periods of time.

But the biggest issue for many prospective buyers will be how much this powerful petrol model costs to run. Thanks to its high output, standard-fit four-wheel drive system and automatic gearbox, the 2.0-litre TSI returns only 40.4mpg according to NEDC fuel economy figures. In our time with the car we managed just 32mpg – ensuring regular fill ups and high fuel bills. Relatively lofty CO2 emissions make it a pricier company car than the less compromised 1.4 TSI, too.