Petrol power is enjoying a resurgence, but does it make more sense in the Peugeot 3008 or SEAT Ateca? 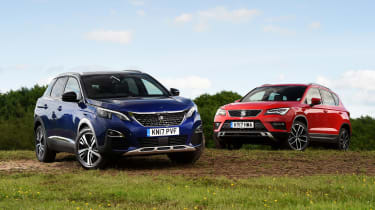 The UK’s fascination with SUVs is still in full swing, but within the sea of new models arriving, the tide is turning.

While diesel used to dominate the mid-size off-roader sector, the Dieselgate emissions scandal planted the seed of doubt in some buyers, with many turning to downsized petrol alternatives like this duo here.

Unless you drive a lot, a turbocharged petrol car could work in your favour. The fuel is still cheaper than diesel at the pumps, and the likes of the Peugeot 3008 1.2 PureTech delivers decent economy on paper.

We’re putting this French fancy head to head with its closest rival, the SEAT Ateca 1.0 TSI, to see which is the better green alternative to a diesel SUV. The SEAT has already seen off the challenge from rival petrol-powered crossovers, beating the Toyota C-HR and Nissan Qashqai. But can the upmarket 3008 blend its premium feel with enough petrol performance to overcome the Ateca? 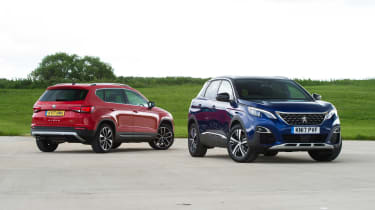 The 3008 stands a good chance, as this second-generation version is certainly more convincing than its predecessor. Peugeot fully redesigned this model, taking it from a dowdy MPV to a full-on stylish SUV, with new underpinnings, a revised engine line-up and a nicely crafted interior.

If it’s to take on the Ateca and win, the 3008 will also have to bolster the qualities listed above with enough practicality to stand up to the rigours of family life, while delivering plenty of comfort and technology wrapped up in a convincing package. 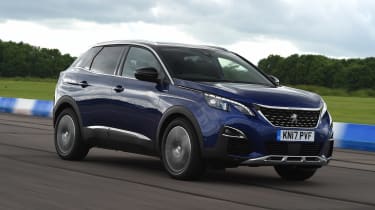 The 3008 signalled a change for Peugeot. Replacing its dowdy predecessor and repositioning the nameplate as a proper SUV instantly placed the car at the sharp end of the class. In 1.2 PureTech Allure spec the 3008 costs £24,295 – more than the Ateca. Is it worth it?

With 129bhp, the 3008’s stronger 1.2-litre turbo engine delivered a performance advantage over the Ateca. It covered 0-60mph in 10.6 seconds – a tenth quicker than the SEAT – but another 30Nm of torque at 230Nm in total and a 30kg lighter kerbweight meant the 3008 was stronger in gear. 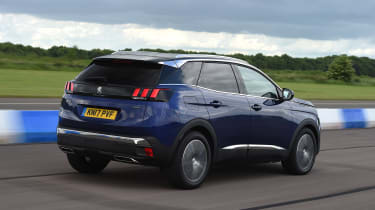 It accelerated from 50 to 70mph in sixth in 10 seconds flat – 3.1 seconds up on the Ateca – while in fifth it was 1.4 seconds faster. The margin was closer between 30 and 50mph in third and fourth, but the Peugeot still had the edge. The six-speed manual’s shift action isn’t as mechanically precise as the SEAT’s, but compared with Peugeots of the past it’s a much tighter and more pleasing action.

Its motor is refined, just like the ride. The chassis has clearly been set up with comfort in mind, as the 3008 smothers bumps with a more refined edge to its damping than the sportier SEAT. 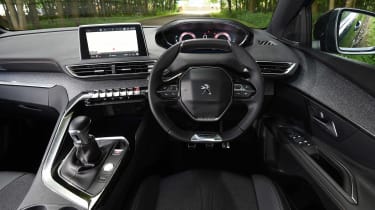 This means it’s not quite as agile or as grippy, but the boost in ride quality will likely be welcome and beneficial more of the time in a family SUV like this. It’s not perfect as it’s still upset by big wheel movements – especially loaded up in corners – but the car is more calm and relaxed than the Ateca, even if it lacks a little of the SEAT’s body control at higher speed.

Testers’ notes: “Peugeot’s decision to move the 3008 from an MPV to an SUV was inspired, even if it was a little later to the SUV party than rivals. But this shouldn’t stop it being a popular choice.” 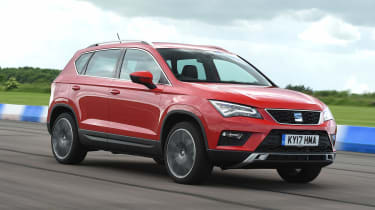 SEAT’s 1.0-litre TSI petrol engine isn’t as widely available in the Ateca range as the 1.2 in the 3008, so it’s the £22,250 SE Technology model we put up against the Peugeot here (although our pictures show an Xcellence version). However, there’s a similar level of tech and efficiency potential on offer – so can the Ateca convert this into victory.

Given the SEAT trails the Peugeot by 16bhp and 30Nm of torque, its 10.7-second 0-60mph time was pretty impressive. That’s partly because the six-speed manual gearbox is such a joy to use. 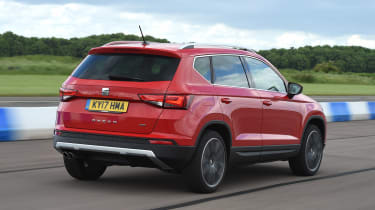 The change action is excellent, offering just the right level of involvement in the mechanical process of shifting gears, with enough refinement, too.

After just a few corners you realise the Ateca is the sportier car to drive. Alongside the gearbox, it offers weightier, more precise steering than the Peugeot, making the most of the extra grip the MQB chassis provides over the 3008’s EMP2 set-up.

However, you pay a price for this engagement and precision when it comes to ride comfort. Both cars ride on 18-inch wheels, but the SEAT feels firmer. It doesn’t float over nasty tarmac or have the compliance of the Peugeot over rougher roads. 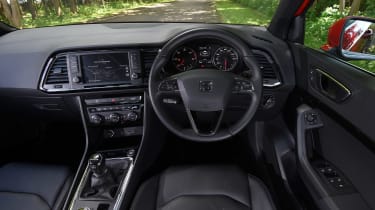 It’s more unyielding, which is transmitted through to the passenger compartment, impacting comfort. Even on the motorway it jiggles and fidgets more than the 3008, which moves with the road a little more harmoniously.

Testers’ notes: “Progress with turbo petrol engines means that this 1.0 TSI is actually our pick of the range. It’s responsive, more refined than the diesels and won’t break the bank to run.” 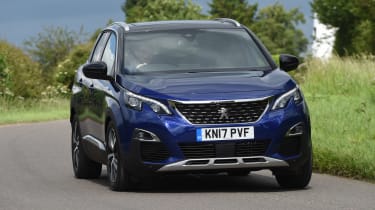 A stronger turbo petrol engine allied to the 3008’s comfort and refinement contributes towards its victory over the Ateca here. However, the smarter cabin, bigger, more practical boot and more advanced infotainment seal the deal. The Peugeot is more expensive to buy, but you get more for your money, and you’ll spend less of it to run the 3008. 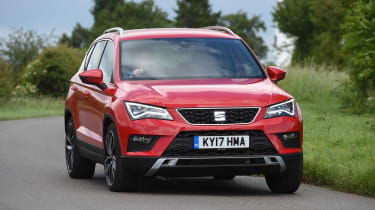 The Ateca is a sweet SUV in 1.0 TSI form. It’s great to drive and affordable. However, it can’t match the Peugeot for comfort, which will be a bigger boon more of the time, and nor can it match it for kit or quality. Add in higher running costs, and although there’s little to separate them in terms of versatility, it narrowly loses out to the 3008. 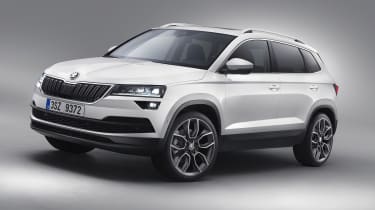 The Karoq is Skoda’s version of the SEAT Ateca. It uses the same chassis and engine, but is likely to be more comfortable, cheaper and offer a bigger boot, posing a challenge to the 3008