We're big fans of the SEAT Ateca, but is the petrol automatic a good combination for the popular crossover? 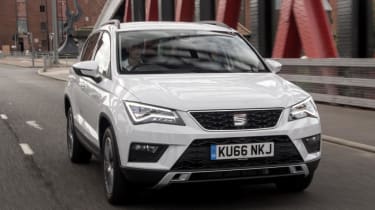 The SEAT Ateca is still an excellent family crossover, and with the diesel scandal creating uncertainty in the market, buyers are sure to flock to this excellent petrol model. However, a manual gearbox is a better fit for the 1.4 EcoTSI as the auto is jerky in town. Those dead set on a self-shifter are still better served by the diesels.

We’ve heaped plenty of praise on the SEAT Ateca since it arrived last year. Winning the 2016 Auto Express Crossover of the Year award in such a fiercely competitive category is no mean feat, either. The entry-level 1.0-litre TSI manual is our pick of the range, but is this more powerful auto a better bet?

A flagship Ateca Cupra will launch later this year, but for now we’re testing the punchiest 148bhp 1.4 EcoTSI. We’re already familiar with this engine, given it’s fitted in a huge variety of VW Group products, but this is the first time it’s been available to try in the Ateca with an automatic gearbox.

In theory, it’s a good combination; a punchy and smooth four-pot turbo mated to one of the most established dual-clutch gearboxes in the business – all fitted in a great handling family crossover. It adds £1,350 to the purchase price spec-for-spec, though, and despite only producing 2g/km more CO2, it’s in a higher Benefit in Kind tax band for company car drivers. Of course, private buyers could potentially swallow that higher list price with a good PCP deal.

All of those points are shared with rivals like the Peugeot 3008 and Renault Kadjar, however, so what matters more here is the driving experience. The DSG gearbox works really well with the diesel models, keeping the engine in the optimum power band and shifting quickly and smoothly, but it’s a slightly different story with the petrol.

As we’ve found in other cars using this powertrain combination, the engine and gearbox pairing results in some jerky responses around town. Most frustrating is the time it takes to react at roundabouts and junctions – if you lose patience when trying to pull away smartly, it’ll suddenly drop a gear and the front wheels will spin.

Things improve greatly out on the open road, though. The changes are as rifle-bolt fast as we’ve come to expect from a DSG, while it also does a good job of keeping the motor in its preferred power band. It’s not that fast and can sound strained at high revs, but it feels strong, torquey and in-keeping with the Ateca’s engaging driving experience.

If you want to increase the interaction, then as always you can do so via the steering wheel-mounted paddles. You’ll need to take it easy to have a hope of matching the claimed 51.4mpg, however – our average figure hovered around 35mpg in mixed driving.

Ultimately the entry-level petrol manual is a better all-rounder, as it’s cheaper to buy and will cost less to run. This top-spec Xcellence test car came with optional 19-inch wheels (£680) too, which retain the sharp handling of lesser models but are worth avoiding as they make the ride far too firm and crashy - particularly around town.

But rest assured, even in this specification, the Ateca remains a practical and well-equipped family car. There’s plenty of space inside, while a 510-litre is on a par with many rival models. Entry-level S cars (not available with the 1.4-litre engine or auto box) get alloy wheels and a five-inch touchscreen, while SE adds cruise control and MirrorLink smartphone connectivity. Our Xcellence sits above SE Technology and comes loaded to the rafters with a rear-view camera, full LED lights and keyless entry