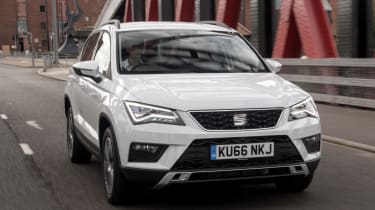 As we’d already driven the SEAT Ateca with the 1.6-litre diesel engine, we knew this petrol version had a fight on its hands to match that car’s blend of handling, fuel economy and refinement. The tried-and-tested 1.4 is an eager and frugal alternative that for some may prove just as cheap to run. It feels lighter, and offers the same style and practicality as other models in the range. This top-spec XCELLENCE is well priced too, with loads of kit fitted as standard.

While many manufacturers have been enjoying years of success with an ever-growing crossover range, it’s taken SEAT a little while longer than most to dip its toes into SUV waters.

Bosses wanted to wait until the Ateca was just right before launching head-first into Europe’s most competitive market.

Last month, we sampled a diesel-powered First Edition model in the UK – and it didn’t take long to realise SEAT’s first SUV was well worth the hype. We praised its sharp styling, decent kit list, practical body and flexible powertrain; the 1.6-litre TDI is strong in everything from the Volkswagen Golf to the Audi A3, and it proved the same here in the Ateca.

Now, however, we’ve taken the keys to a powerful 1.4 TSI petrol, to see if the dependable turbo engine is as capable here as it is in its VW Group siblings. It has long offered a pleasing blend of performance versus running costs on the brand’s family hatchbacks, but how does it compare in the Ateca’s bulked-up body? 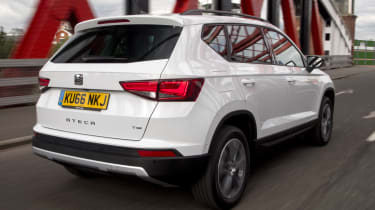 On paper it shaves three seconds off the diesel’s 0-62mph time, and feels quicker away from junctions and down motorway slip roads. Maximum torque figures are identical, with the 250Nm available from 1,500rpm giving the TSI suitable in-gear grunt. Power delivery is smoother than in the diesel, and it’s more refined under hard acceleration.

The petrol car’s sophisticated nature continues at motorway speeds, where the engine is barely detectable when cruising at 70mph. The large 19-inch wheels and low- profile tyres on our test car gave a grumble, but this is improved on smaller rims like those pictured here. Wind noise isn’t an issue given the SUV’s increased profile.

As with the diesel, SEAT engineers have made the petrol-powered Ateca handle like something half its size. There’s very little in the way of body roll, while the steering feels direct and it has no problem changing direction with urgency. The slick six-speed gearbox is identical to that in the TDI, but the longer ratios and boosty turbocharger allow you hold on to the gears for longer. 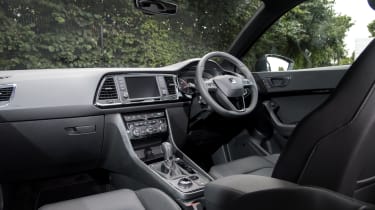 Those big wheels do compromise ride comfort, though, seeking imperfections on more rutted roads. It’s a similar complaint to the one we highlighted when we drove Audi’s new MQB-based Q2 earlier this year, whereby it appears to create tiny little bumps that are otherwise invisible to the eye. It’s far from uncomfortable, but unless you really need the £670 optional 19-inch wheels, we’d stick with a more modest size. It’s not like the Ateca requires any additional visual impact, after all.

You’d expect the diesel to trump the TSI petrol on running costs, and in some areas this is true. This car claims 52.3mpg compared with the TDI’s 64.2mpg – while CO2 emissions of 125g/km place it one VED tax band higher than the diesel. However, if you’re a company car driver, the three per cent diesel surcharge puts this petrol in the same Benefit in Kind bracket. If you don’t cover huge mileage, this faster petrol could stack up. Either way, it’s cheaper to run than Nissan’s more powerful Qashqai 1.6 DIG-T, which promises 47.1mpg and 138g/km of CO2. Cylinder deactivation tech helps it beat the Renault Kadjar, too. 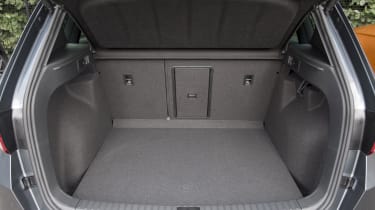 With the allocation of First Edition cars almost entirely sold out, this top-level XCELLENCE version is likely to prove popular among those looking for a well equipped family SUV. It gets LED lights and SEAT’s tried-and-tested sat-nav system, while every Ateca benefits from Full Link mobile phone connectivity and rear parking sensors.

Interior quality is good across the range – nowhere more so than in our top-spec test car. While the materials don’t have the expensive quality feel found in a VW Tiguan, the Ateca is well built inside and out.