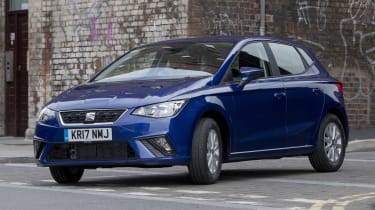 If someone handed you the keys to an entry-level SEAT Ibiza, few would feel short-changed. It offers the same spacious cabin, responsive handling and sleek looks as its more powerful siblings, and around town it’s just as agile and easy to park. However, for just a little bit extra per month, the excellent TSI turbo engine adds a welcome dose of performance and even lower running costs – so for us it remains the pick of the range.

We’ve already heaped the latest SEAT Ibiza with praise, awarding it our top supermini prize in this year’s Auto Express New Car Awards. And despite losing out to the new Ford Fiesta in a subsequent road test, the Leon-inspired small car still has plenty to love.

We rated its peppy turbo engine highly, while its grown-up cabin, smart styling and engaging handling were plus points, too. It’s also loaded with tech, and offers plenty of space in the back for adults – making it feel more grown-up than many of its rivals.

But while lots of buyers will favour the more powerful 1.0 TSI, the entry-level car uses a non-turbo 74bhp MPI unit. It offers younger drivers cheaper insurance, and while performance suffers somewhat, it’s the only version available in basic S trim. 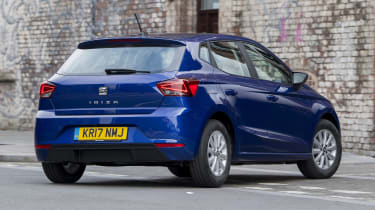 In this guise, prices start from just £13,190 – and all cars get Bluetooth connectivity, a five-inch touchscreen and a multi-function steering wheel. Our car was the plusher and better-equipped SE model, which adds desirable extras such as alloy wheels, a colour display, air-con and LED daytime running lights. If budget allows, this is the spec we’d go for.

But what about the engine? Downsized turbos are commonplace in the supermini market these days, but many models are still available with more rudimentary naturally aspirated units. The SEAT’s is among the best, and never feels as slow as its seemingly conservative figures suggest. Officially, 0-62mph takes 14.7 seconds (versus the 94bhp turbo’s 10.9-second time), but the car feels sprightly enough around town.

It revs cleanly, and can even hold its own on the motorway, where the turbo model’s mature driving experience remains intact. Pull out in a hurry and you’ll have to thrash through the gears, but the five-speed box feels solid and precise, and the direct steering, tight body control and strong brakes offer plenty of appeal for keener drivers.

But where the MPI-engined Ibiza really falls down is when it comes to running costs. Despite offering more power, the turbo unit emits less CO2 and will, in theory, return more miles per gallon. On paper at least, the TSI will cost around £135 less in petrol alone over three years and 36,000 miles.

And the turbo car’s argument is even more compelling when you look at the monthly PCP finance deals. A 1.0 MPI in SE spec will cost you around £190 per month after a £2,000 deposit, while an identically-equipped TSI is only £16 per month more on a three-year deal with the same terms. 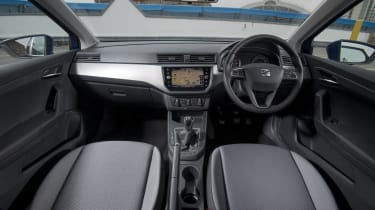 Of course, whichever model you go for, you get the same practical cabin and roomy boot. Quality is very good, save some scratchier plastics on the doors and dash, and the dials and infotainment system are easy to operate. Sat-nav is a £660 option, but most will make do with the £150 Full Link system, which allows seamless smartphone connectivity (and map access) via Apple CarPlay or Android Auto. Other popular extras include a DAB radio (£145), rear parking sensors (£220) and dual-zone climate control (£320). Full LED lights cost £480 on SE cars.