We drive the SEAT Ibiza with the brand's 1.6-litre TDI diesel engine to see if it can tempt buyers away from the petrol-powered models 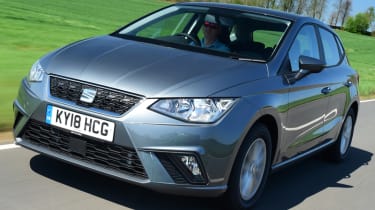 It’s not that there’s anything really wrong with the SEAT Ibiza TDI, it’s just that in the current climate you’ll need a really good reason to run one. You can’t argue with the rock bottom running costs, sharp handling or solid build quality, but that doesn’t change the fact that the diesel supermini remains a niche product that’ll suit only a small number of potential buyers.

Superminis still account for a big proportion of new car sales. But small diesel cars have suffered in recent times, thanks in part to the uncertainty surrounding current and future taxation for them.

Yet, for many high-mileage motorists, diesel is still the best solution. True, those traipsing up and down the UK’s ridged and rutted motorway network may see appeal in larger C- or D-segment cars, but many still value the convenience and practicality of a small five-door hatch.

As such, SEAT has just added the frugal 1.6 TDI to its popular Ibiza range. It’s a variant we first drove on the European launch late in 2017, but this is our first chance to try one this side of the Channel. In big-selling SE Technology trim, it comes with all the gifts and gadgets you’d expect on a car of this price, too.

But that price is a bit of a sticking point. At £17,110, it’s a smidgen over £2,000 more expensive than the excellent 93bhp 1.0 TSI petrol variant, and even on a PCP deal you’ll be paying around £60 more per month. Whichever way you look at it, you’ll need to do an awful lot of miles before you break even.

SE Technology is our top trim choice, and comes loaded most of the kit you’ll need. There’s an 8.0-inch touchscreen, sat-nav and Bluetooth connectivity, but you’ll pay extra for Full Link and Apple CarPlay.

The Ibiza is also among the more practical cars in the supermini class. In fact, its 355-litre boot is only slightly smaller than many models in the segment above. 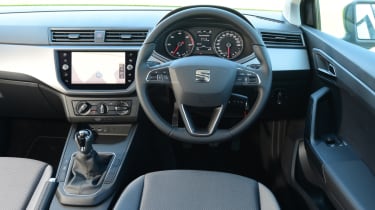 There’s no arguing with the published fuel economy, however. SEAT claims a combined figure of 74.3mpg, but on a steady 70-mile run our car’s trip computer posted a scarcely believable 79.4mpg. Even without its rivals’ fancy efficiency settings, the Ibiza TDI is an incredibly frugal car.

But while it might be economical, it certainly isn’t fast. The 0-62mph sprint takes a leisurely 13.3 seconds, and at low revs the engine can bog down and feel quite sluggish.

The narrow torque band (1,400rpm to 2,400rpm) has you changing gear more often than you’d perhaps like, but keep it in the sweet spot and it’s sprightly enough. The sharp steering and decent body control is just as it is elsewhere in the Ibiza range.

It’s perfectly at home on the motorway, too – and providing you don’t require sudden bursts of acceleration, it’ll happily sit at 70mph all day long. It’s not as quiet as the turbo petrol, but it’s as hushed as you’d expect a small-capactity diesel engine to be.

For more news and reviews on SEAT cars, visit our dedicated hub page.