We get behind the wheel of the new SEAT Ibiza FR in the UK, with an energetic 1.0-litre turbo engine 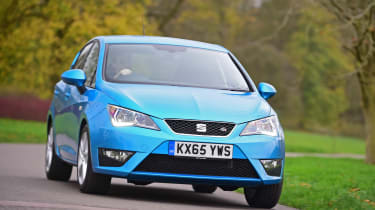 Gloss over the familiar exterior and it’s easy to spot the welcome changes SEAT have made to the Ibiza. The dash (a bugbear on the old car) is improved significantly and the addition of Apple CarPlay is a good selling point. The 1.0-litre turbo is also impressive, but the older underpinnings show in the lack of rear space and merely average driving dynamics. The Ibiza is also a better value package in a lower spec than this top-spec FR, too.

SEAT’s range is set to expand in the next few years with an influx of SUVs, but it’s the Ibiza and Leon hatchbacks that currently take the lion’s share of sales. As SEAT’s UK registrations fell a steep 32.2 per cent in October, the refreshed and more tech-laden Ibiza can’t come soon enough. We tried it in sporty FR trim with the brand new 1.0 EcoTSI 110 petrol engine and a DSG automatic gearbox.

In the face of much newer rivals like the Mazda 2, Hyundai i20 and Skoda Fabia, the seven-year old Ibiza isn’t the freshest in the pack. This is its second major nip-and-tuck in that lifetime (and a subtle one at that) but it remains a very smart and attractive small car that visually keeps its advancing years at bay.

New LED daytime running lights, additional colours and fresh alloy wheel designs are all you’ll find that’s changed on the outside, but SEAT insists it has listened to customer’s feedback and has worked harder on the cabin. 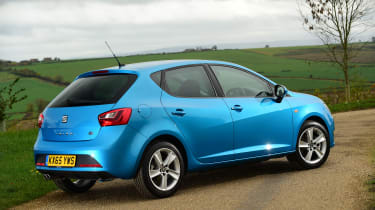 Step inside and you’ll notice many of the hard, scratchy plastics of the old car have been softened and the dated switchgear modernised to bring it in line with the Leon. It’s not quite as convincing as its bigger brother (there’s only so much you can do on an older platform) but the general fit and finish and intuitive layout finally meet the expectations of a VW Group product.

The most welcome change is that the old car’s fiddly radio has been binned in favour of a touchscreen unit across the range. It’s only five inches and monochrome on the £10,000 base model, but our car was fitted with the £500 Media System Plus, bringing a slick 6.5-inch display and sat-nav. 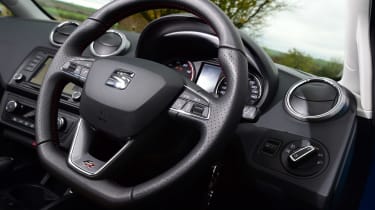 It also makes it one of the cheapest new cars to come with ‘Full Link’ (which includes Apple CarPlay, Android Auto and Mirrorlink smartphone connection). It works well, and the only oddity is the steep rake at which it’s angled on the dashboard.

Where the Ibiza can’t hide its age, though, is in the back. Even five-door models suffer from a lack of kneeroom, and taller passengers can feel quite hemmed-in compared to key rivals. The boot is a reasonable 293 litres, but there’s not much to shout about in terms of useful storage cubbies. It’s acceptable given the Ibiza is designed for a more youthful, style conscious market than the roomier Fabia, however.

Under the skin, a new 1.0-litre ‘EcoTSI’ turbocharged petrol engine is now available, either with 94bhp or 108bhp. The latter is only available in range-topping FR spec with a DSG gearbox, however. It feels smooth, punchy and refined, though it’s clearly better suited to a manual gearbox – and it’s worth noting that the lower-output 1.0-litre feels almost as energetic. 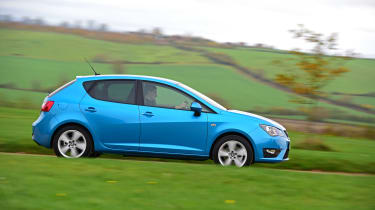 Although the focus has been on improving the cabin and efficiency, SEAT claims to have worked on the suspension and steering to improve ride and handling. Certainly, models we tried with smaller wheels and a less sporty set-up felt more cushioned and up to the class standard, but our FR spec still felt harsh over rough roads and lacked control over bumps and crests. Despite this, body roll isn't kept in check brilliantly either.

Road noise is an issue, too, but at least the steering feels direct and turn-in is keen. It’s no match for a VW Polo for noise isolation, and falls short of the class-leading Ford Fiesta in terms of ride and handling.