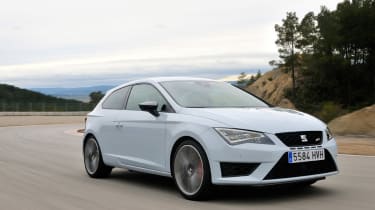 The SEAT Leon Cupra is similar to the Golf GTI, so we were confident it would deliver, and we were right. Let it rev and there’s ballistic performance from the 276bhp engine, but ease off and it’s just as comfortable and civilised as the standard car. The front differential works brilliantly, maximising grip and cornering speeds, while next to its main rivals it represents excellent value. We love the way the Cupra looks, too, whether you go for the three or five-door version, but wish the designers had been let loose a little more. Hopefully they are saving themselves for an even more powerful, four-wheel drive Cupra R…

It’s no secret that we’re big fans of the standard SEAT Leon at Auto Express – we named it our Car of the Year in 2013, after all – but can the Leon Cupra have the same impact in the hot-hatch class?

On paper it makes an impressive start - although it shares a large proportion of its mechanicals with the VW Golf GTI, the Cupra produces up to 59bhp more, comes with more standard equipment and looks a whole lot more interesting, too.

The engine is a development of the same 2.0 TSI unit used in the Golf GTI, producing 276bhp in the Cupra 280, or 261bhp in a £25,690 entry-level model only available as a three-door and with a manual gearbox. Go for the higher power output and you can choose between three or five doors, and six-speed manual or DSG gearboxes. The 0-62mph sprint takes 5.7 seconds in DSG-equipped Cupra 280s, a tenth slower in 280 manuals and two-tenths slower in the 261bhp version.

It’s an engine we’re familiar with by now, having driven it in the Skoda Octavia vRS and Golf GTI, and it keeps the same basic character in the Cupra. Throttle response is excellent from low revs and there’s plenty of torque, so it’s more than happy to waft around in a higher gear conserving fuel. Push the pedal to the floor though and there’s a linear surge of power before it shows its savage side between 4,000 and 7,000rpm. Ultimately, acceleration lacks the snap of the four-wheel drive, 296bhp VW Golf R, but let it rev and you’re unlikely to get bored of the shove in the back or the blare from the twin exhausts.

The most important addition to the Cupra’s standard equipment list is a limited slip differential fitted to the front axle. In normal circumstances, sending 276bhp to the front tyres is a recipe for torque steer and understeer, but by shifting power to the front wheel with more grip during cornering it helps the Cupra stick like glue to your chosen line. Get on the power early and rather than the inside wheel spinning uselessly you can feel the differential lock up, the tyres bite into the tarmac and the car is catapulted down the next straight.

It means the Cupra slices through fast sweeping bends, and whips around tight corners, allowing you to make incredibly fast progress. In fact, SEAT is already hinting that this could be the fastest front-wheel drive production car ever around the Nurburgring, knocking the Renaultsport Megane 265 off the top spot.

The steering is light, but sharp enough, and you can really feel the variable ratio working its magic in tight corners - you rarely need to cross your hands. SEAT has also done an excellent job of dialling out torque steer – accelerate hard with some lock applied and the wheel still squirms in your palms, but never tugs or wrestles around violently.

As well as suspension that’s lowered by 10mm at the front and 5mm at the rear compared to the Leon FR, the Cupra includes three-stage adaptive dampers as standard. Four modes – Comfort, Sport, Cupra and Individual – let you tailor the behaviour of the steering, gearbox, differential and throttle as well as how firm you want the suspension, and the difference is immediately tangible. Select comfort, slot the gear selector into D, and it feels as refined and comfortable as any other Leon. Choose Cupra though and the whole car tenses and bristles with pent-up energy.

If we had a criticism it’s that it hides its potential too well. Drive it at eight-tenths and above and you can feel the differential working with the front tyres to find every last ounce of grip, while the engine sings away under the bonnet. Take it easier though and it feels too similar to an FR model with any old TSI engine.

All Cupra’s get full-LED headlights, 18-inch wheels (19-inch on 280 models) and a deeper front bumper with bigger intakes, as well as a diffuser and two oval exhausts at the rear. On the inside there’s a stitched-leather flat-bottomed steering wheel, sports seats trimmed in Alcantara with brightly-coloured bolsters and a sprinkling of Cupra badges. In isolation the Cupra is a stunning car to behold, especially the shorter-wheelbase three-door version. It’s a feast of angles and blade-like creases, but we can’t help wishing the designers had gone even further.

If style and performance don’t get the Cupra on hot-hatch buyer’s shopping lists, then the pricing should. The five-door DSG 280 model we drove only costs £330 more than the equivalent VW Golf GTI, despite a 59bhp power advantage, plus the limited-slip differential and adaptive dampers – both of which are options on the Golf. The entry-level version is cheaper too than the 261bhp Renaultsport Megane 265 and 276bhp Vauxhall Astra VXR – the only two front-wheel drive rivals that can match it for power.