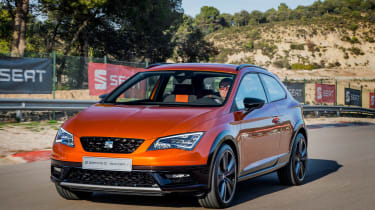 At the moment the jury is still out as to whether SEAT will or won’t put the Leon Sport Cross into full production. But on this evidence, we think they should swallow hard and hit the green button – because to look at, to sit in and most of all to drive, the Sport Cross is, we believe, just the car SEAT needs to go to the next level. In many ways it’s a cut price Porsche Macan, and praise doesn’t really come much higher than that.

The SEAT Leon Cross Sport concept was first unveiled at this year’s Frankfurt Motor Show in September, and without wishing to exaggerate too much, it went down an absolute storm. That was mainly because it is very much a car of the moment.

Sporting a high quality and seemingly showroom-ready new interior plus the small matter of 296bhp under the bonnet and four wheel-drive to support its junior Porsche Macan styling, it hit the headlines and ran with them. SEAT referred to the three-door only Cross Sport at the time as “a performance athlete in high-tech trekking shoes.” And although the hyperbole seemed a little bit far fetched to be fully palatable, you kind of knew where they were coming from. And, more to the point, most of us liked what we saw.

That was then and this is now, just a couple of months later, and oh how very different things have become within the Volkswagen empire, of which SEAT, of course, plays a very big part. The budgets within the VW empire look somewhat different today than they did just a handful of weeks ago, which may or may not explain why SEAT has very gently hit the pause button with the Leon Cross Sport. 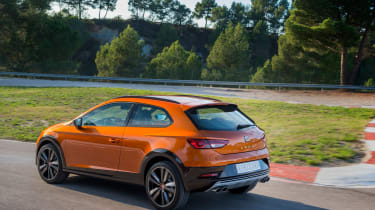 The car hasn’t been canned completely, contrary to what you might have read in certain sections of the motoring press, but neither is it likely to get the go-ahead for full production any time soon. Instead, admits the car’s main designer, Xavier Villanueva, the bosses at SEAT are playing a waiting game for the time being.

“Maybe they will still decide to make the car, maybe not, I’m honestly not sure. But at the moment they need to make certain decisions, make sure the numbers add up, this is the most important thing for the company right now. So maybe if the reaction to the car is really strong (when people like Auto Express and others get to drive the Cross Sport) it might still happen. Who knows?” asks the amiable Señor Villanueva, with just a slight tinge of sorrow in his voice.

Having now seen the car in the flesh for myself, in proper daylight and away from the unrealistic glare of a motor show stand, I completely empathise with the thoughts of a man who has spent the thick end of the last year on this project. For starters, it’s one of the most naturally attractive cars ever to wear a SEAT badge in my humble opinion, with a lovely sense of proportion to it generally but also featuring lots of intricate details – like the sharp slash line on the rear haunches – that have been sorely missing from SEAT’s past. 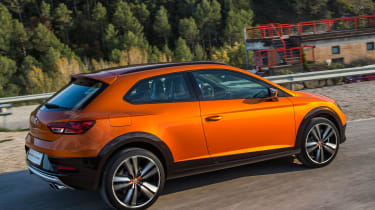 More perplexing still, it also happens to drive rather well, too. I drove it for the afternoon around a quiet track in Catalonia, and I came away thinking; this car is ready for production. OK, its six-speed DSG transmission needed a bit of software honing, perhaps, because it would clonk a bit during upshifts. But given that it’s a concept car, and has therefore undergone not a single moment of production fine tuning, it felt much more ready for the showroom than it had any right to.

As you’d expect with 296bhp beneath the bonnet of a car that has a fifth generation Haldex four wheel-drive system and weighs less than 1,600kg, it goes very hard indeed once the hint of lag has disappeared. Thank the 380Nm of torque that’s available from just 1,800rpm for that, as well as the fundamental composure of what is essentially a set of VW Golf R underpinnings.

Not only is the steering also very well sorted, but the steering wheel itself is quite delicious to the touch, too, thanks to a lovey suede rimmed wheel covering. The seats, also suede, and driving position are pretty much faultless, and in the rear seats and boot there is a decent amount of room, the boot not having been too badly compromised due to the addition of that four wheel-drive system. 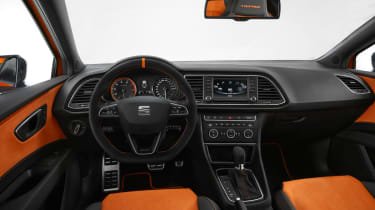 The Cross Sport even sounds good on the move, with a nice deep burble to the exhaust under full load at high revs in a high gear, plus a lovely clean response to the throttle at higher revs when there is no lag whatsoever.

But for the time being, it seems, we will merely have to wait and see what becomes of the SEAT Leon Cross Sport. From this brief experience, it seems like a great car that’s all set and ready to get made, a machine that would take SEAT to the next level in many more ways than one. Let’s hope they make the right decision.