New SEAT Leon Cupra 300 is the most powerful Cupra yet

Facelifted Leon Cupra gets a power boost up to 296bhp, plus a 4WD system for the ST estate model 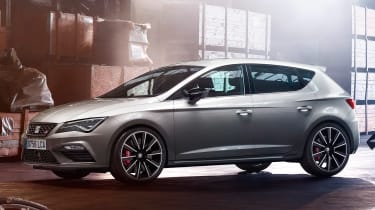 SEAT has officially revealed the updated version of its brilliant Leon Cupra. The barnstorming hot hatchback previously topped out as a 290 version with 286bhp, but now the firm has boosted power by 10bhp to create the Leon Cupra 300, with 296bhp.

All that power comes courtesy of the same 2.0-litre turbocharged petrol engine you’ll find under the bonnet of nearly all VW Group hot hatchbacks, including the Skoda Octavia vRS, Volkswagen Golf R, and iconic Golf GTI. The Leon Cupra 300 now sits near the top of the VW Group’s hot hatchback performance tree – only being bested by the 306bhp VW Golf GTI Clubsport S and the 362bhp Audi RS3.

The Leon Cupra 300 also benefits from added torque – up from 350Nm to 380Nm. SEAT hasn’t commented on how this will affect performance, but we’d expect to see a marginal improvement on the current car's 5.9 second 0-62mph sprint. 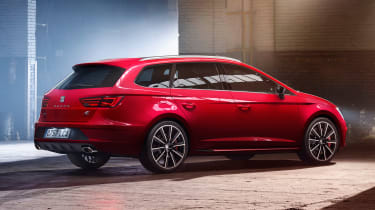 The ST estate version of the Leon Cupra also sees a power boost, but the bigger news is the addition of a 4WD system, named 4Drive. It’s the same 4WD system you’ll find on the SEAT Leon X-Perience, and harks back to the early noughties and the first-generation Leon Cupra, which also offered 4WD.

A Haldex clutch and electronic locking differential should endow the Leon Cupra ST with enhanced traction on slippery surfaces and 4WD security. It makes for a rival to the likes of the Volkswagen Golf R estate, or a more powerful alternative to the Skoda Octavia vRS estate 4WD.

SEAT hasn’t confirmed if there will be a 4WD hatchback version of the Leon Cupra, claiming the system used has been developed for estate cars like the standard ST and X-Perience. 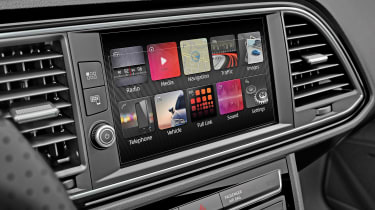 On the surface, the car receives the same updates as the rest of the Leon range. That means a mild facelift consisting of a new front bumper and grille design, and an updated interior with an eight-inch touchscreen infotainment display. Safety equipment has been upgraded, too, and the new Leon Cupra offers Traffic Jam Assist, Adaptive Cruise Control and Pedestrian Protection.

We’re expecting order books to open for the new SEAT Leon Cupra 300 next summer, with prices starting around £29,000.

What do you think of the SEAT Leon Cupra? Let us know below...