Skoda has pulled the covers off the latest creation to emerge from its annual Azubi Car project, unveiling a roofless Karoq SUV called the Skoda Sunroq.

23 students from seven different professions teamed up over a period of eight months to develop and construct the car at Skoda’s vocational school in the Czech city of Mlada Boleslav. 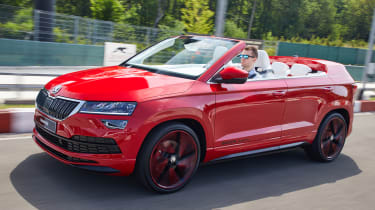 Sitting on 20-inch alloys, the Sunroq gains shock absorbers from the Octavia vRS, while the ride height has been lowered by 50mm to give the car a sleeker stance. Meanwhile, the exhaust has been adapted to produce a sportier sound.

These changes are in addition to the significant work carried out on the doors, pillars and tailgate, with internal reinforcements required to make up for the removal of the roof.

As a result of these alterations, the boot is now bigger than it was before the process began, and the removable floor within now conceals an enormous subwoofer to boost sound levels.

The Sunroq is finished in Velvet Red paint, chosen to reflect the sporty nature of the car and its ambition to be “the perfect companion on summer holidays”. Other features include backlit handles, an illuminated badge on the bonnet, a custom indicator light signature, and Skoda logo projections around the base of the car.

The name, meanwhile, was chosen by the students after customers and fans submitted ideas in a social media campaign. The person who suggested ‘Sunroq’ has since been invited to drive the car. 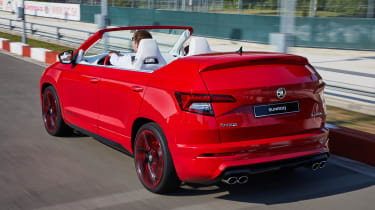 This is the fifth year of the Skoda Azubi Car project, with previous concepts including the convertible Citijet, Funstar pick-up, Atero coupe and Element electric car.

Like these, the Sunroq will remain a one-off, with no plans to put it into production. However, the Czech brand will tour the roadster at numerous events over the coming months.

While the Sunroq - or indeed a Karoq roadster - is unlikely to hit ever showrooms, the purpose of the Azubi Car project has never been to inspire a production model. Giving the students experience of building a car themselves is considered far more important as they undergo their studies at Skoda’s Secondary Vocational School of Engineering.

“One of the most important parts of the project is that they are learning how to work in a team,” says Martin Slabihoudek, the school’s head. “How to get to common decisions, and having arguments for their solutions, and so on. They are definitely getting more and more confident.”

Indeed, the students’ self-belief can be a source of apprehension for school officials and members of the Skoda board, as the group was given significant freedom to carry out its work. Previous Azubi Car vehicles have featured large sound systems and exuberant exhausts typically favoured by teenagers, and this year’s Sunroq is no different. 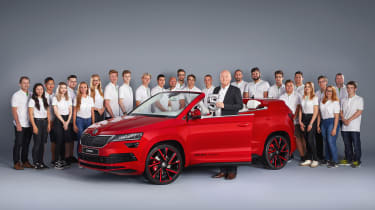 “Of course we are a little bit nervous,” Slabihoudek says, who also admits that the students lost a bid to give the Sunroq even more power than its modestly uprated 161bhp. “However, we have a lot of resources and a lot of time to give them this freedom, and we’re glad that they can experiment and do whatever they want.”

Naturally, the students aren’t left entirely to their own devices. Skoda’s technical development team provided the body of the car, spare parts and ideas for engineering solutions, while trainers at the school were on hand to provide guidance as the vehicle came together.

At the beginning of the process, around 80 students submitted sketches of the car they thought should be built for this year’s project. The final group of 23 was selected based on the quality of their designs, while grades and exam results were also taken into account.

Three ideas were put forward for 2018’s creation - including an Octavia Super Sport and a Kodiaq pick-up truck - but the Karoq roadster was chosen based on the current popularity of SUVs. 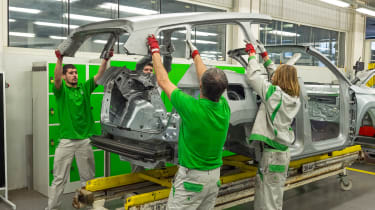 “It was hard work,” says student Milan Cu, who specialises in electronics. “But we are happy because at the start, we chose a hard way. And now, we’ve finished it.”

Completing the project ahead of their May deadline was no mean feat: the students had to come up with a detailed plan for the car before a single cut could be made to the body of the Karoq frame, and they were also tasked with defending their decisions in rigorous Q&A sessions with visiting board members.

And on top of the serious structural changes required during the build itself, each feature on the Sunroq needed immense attention to detail. The software for the indicator light, for example, had to be painstakingly made from scratch to achieve its LED ticker effect. “We could have used some other solutions from different brands,” concedes Ondrej Bacik, another electronics student. “But we wanted to do that on our own.”

By all accounts, the students have been grinning from ear to ear since the Sunroq was completed, and their efforts were rewarded earlier this week with their creation given primetime coverage on Czech television. Messages from friends and family have poured in, and their hard work has been widely praised. “If the trainers built the car, it wouldn’t be so joyful for the students,” says Slabihoudek. “And that’s the reason it works quite well.”

The only drawback for many of the students is that they are still too young to hold a driving licence, and so won’t get a chance to drive the car they worked to tirelessly to build. Skoda says they will “find a solution” when the youngest members of the team eventually pass their tests, but for some that won’t happen for at least another two years. 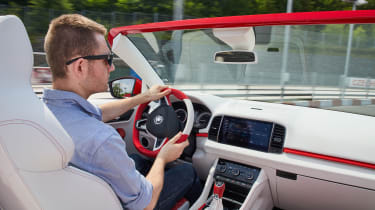 Auto Express was invited to drive the Sunroq on a closed circuit in Prague, and while the test was limited to speeds of 25mph, we got a flavour of what the students will experience when they finally get behind the wheel.

The most noticeable thing from the driver’s seat - other than the exposure to the elements - is the soundtrack provided by the modified exhaust. The students wanted a sporty noise, and they’ve certainly achieved that with a fun, burbling note that rings out under acceleration.

• Best SUVs and 4x4s on the market

The additional torque ensures that the Sunroq feels reasonably keen, but even combined with a modest power increase, the cabrio is no faster than the Karoq in the 1.5-litre engine’s usual 148bhp state.

Meanwhile, the stiffer, Octavia vRS sourced suspension makes the Sunroq nimble through tight corners, although a lack of feel through the steering wheel means some of that agility is lost in translation. 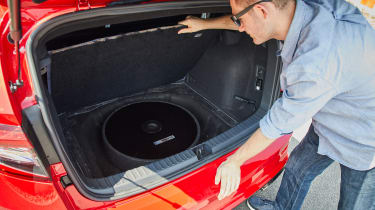 Happily the ride doesn’t seem to have suffered as a result of the surgery, though the smooth test track was unlikely to unsettle it anyway. The plush seats only add to the comfort, and while the bold red and white interior might not appeal to all tastes, the leather-lined panels have been finished to a high standard.

Above all though, the Sunroq addresses one of the main criticisms levelled at the Karoq it began life as; namely, its conservative character. By removing the roof and tuning the exhaust, the Sunroq has been transformed into an entertaining drive, with the grown-up feel of the Karoq thrown straight out the window. Or at least it would be, if the Sunroq had any.

Now read our review of the Skoda Karoq 1.6 TDI diesel…