This is the Skoda Vision IN concept. It previews an upcoming family SUV that will be built specifically for India as the Czech firm attempts to get a foothold in one of the fastest growing new car markets.

The SUV will enter production next year and be the first model from the VW Group to be based on a new version of the MQB platform called MQB-A0-IN. It will be built locally at a facility in Aurangabad, India.

At 4,265mm long the Vision IN sits between the Skoda Kamiq and Karoq in terms of size, and is powered by the brand’s familiar 148bhp 1.5-litre four-cylinder turbo petrol engine. 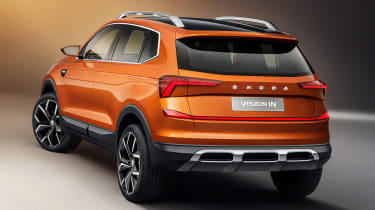 The Vision IN has also adopted a range of design cues from the brand’s other SUV models such as the split LED headlamps, stretched front grille and curved tail lamps.

Skoda has also made extensive use of recycled or vegan materials in the cabin to reinforce its focus on sustainability. Rhubarb leather has been used on surfaces, the seats are trimmed in recycled pineapple leaves, and the roof lining is made of recycled plastic fibres.

Skoda, as well as the wider VW Group, have been present in the Indian market since 2001. However, the project failed to really take off due to the local dominance of Suzuki and Hyundai.

Now the Cezch firm is leading the Group’s renewed drive on the market, called India 2.0, that starts with a production version of the Vision IN concept in 2021. Skoda also has established a new technology centre and a Digilab in the country to aid the development of local mobility and technology solutions.

Over €1billion has been invested into the India 2.0 project, of which a quarter has gone into research and development. Around 95 per cent of future models based on the new MQB-A0-IN platform will be built and sold locally.

Indian car market at a glimpse

India is the fourth largest car manufacturer in the world behind Germany, Japan and China. In 2018 over 4.06 million vehicles were produced. Around four million vehicles, including commercial vehicles, are also sold in India every year, a figure that is expected to rise to 6.7million by 2025.

Maruti Suzuki and Hyundia currently dominate the Indian passenger car market with a combined market share in excess of 65 per cent.

Do you like the look of Skoda's Vision IN concept? Let us know your thoughts below...