Skoda’s version of the Volkswagen up! offers all the style, space and quality of the VW, but for less cash 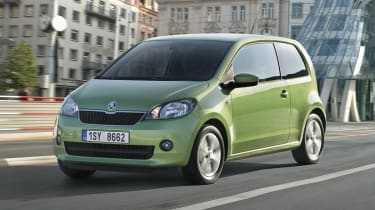 Next year is set to be the year of the city car, and the Skoda Citigo could top the lot. It has the combination of cheeky looks, low costs and grown up feel that makes downsizing so appealing – we especially like the characterful engine, the comfy ride and the amazing amount of space inside. Whether you prefer the looks and image of the Skoda, VW or SEAT versions is down to you, but the Skoda’s extra value and kit could well give it the edge.

You need more than just a catchy name to make a successful city car, but it helps. While the i’s have it for Hyundai, the Fiat 500 takes you on a trip down memory lane and Kia has gone all cutesy with the Picanto, Skoda has taken a route one approach with the Citigo – a car to get you out and about in the city.
Let’s get the sibling thing out of the way first. Yes, the Citigo is pretty much the same car as the VW up! (don’t forget that exclamation mark) and the SEAT Mii (with two 'i's). But with a front grille drafted in from Skoda’s sexy Mission L Frankfurt concept car and a price that will likely undercut the VW by at least £500 when it appears in the UK next summer, the Skoda is more than just a VW clone.
Video: Watch CarBuyer's video review of the Citigo
[[{"type":"media","view_mode":"content_narrow","fid":"69346","attributes":{"alt":"","class":"media-image"}}]]
This is still the Skoda model that’s most like its VW cousin, though – but for the badges, dash graphics, a different boot door and squarer rear windows, it’s pretty much the same car as the up!.
That’s no bad thing – we’ve already raved about the up! and we’re about to do the same with the Citigo, but with the added bonus of that £500 saving.
For such a diminutive car, it has an incredibly grown-up feel: from the quality of the cabin to the way the car rode the bumps on our test route around Skoda’s home city of Prague.
The three-cylinder engine is reasonably perky in both its guises – choose from 60 or 75bhp versions, the latter reducing the 0-62mph time by 1.2 seconds to 12.7, and reducing average economy by 2.7 to 60.1mpg. The performance figures are respectable, but the economy figures are no better than okay, especially as they equate to CO2 figures of 105g/km and 108g/km.
Skoda has stop-start and energy recovery systems that will drop the CO2 figures below 100 g/km and will find their way into a Greenline version eventually, but they may also be offered as an option or as standard on top-spec Elegance models.
The starting price for the 59bhp car is expected to be around £7,500 (the 74bhp model will cost around £350 more, with another £350 premium for five-door models), but entry-level S models will do without air-con or electric windows. SE trim gets both of those plus more and will be the most popular choice, adding around £700 to the price. Elegance will be another £700 on top of that, making a top-spec 70bhp five-door Citigo around £10,600.
Skoda will be trying to tempt you with some big car, luxury options. As well as an automatic version, you can get a full-length opening glass roof, a city-safe rear-end shunt avoidance system, cruise control, heated seats and parking beepers. Like VW, Skoda is offering a bespoke Navigon navigation-cum-infotainment system that sits on top of the dash, but again the Skoda version is likely to undercut VW’s identical model at around £250.
We drove both 59bhp and 74bhp cars, with the more potent engine proving to be a little more refined, but the extra power doesn’t really translate to the road – torque figures are identical at 95NM from 3000rpm.
The cheeky burble of the three-cylinder engine adds to the car’s appeal around town, while it gets all grown up on the motorway where you can barely hear it.
The car will keep up with traffic okay, too, although with four on board and a hill ahead you may have to drop down a gear and turn up the stereo.
Those four people will have an amazing amount of space given the car’s size. Although the car is short (just over 3.5m), the wheelbase is long (just under 2.5m) so a six foot adult can sit behind a six foot driver… just. The front seats slide out of the way to make it easy to get into the back, too. All that and there’s still decent boot space – at 251 litres it’s better than in rival city cars.