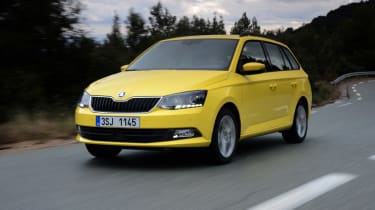 The Skoda Fabia Estate offers an impressive combination of outright space, interior quality and value for money. It’s good to drive, cheap to run and – if you go for one of the turbocharged petrols – pretty sprightly too. If you want or need the extra 200 litres of boot space over the already practical hatch, it’s well worth a look.

The small estate car is a relatively rare sight on UK roads, especially since the demise of Renault’s Clio Sport Tourer back in 2012. However, that hasn’t stopped Skoda launching an all-new version of its Fabia Combi – or Fabia Estate as it’s badged here in the UK – just a few weeks after the launch of its revamped hatchback.

Visually, it’s not quite as coherent a design as its hatchback sibling. From the nose to the B-pillar you’d struggle to tell the two apart, but the raised roofline and boxier rear end give it a slightly slab-sided stance. The shrunken-Octavia looks haven’t translated quite as well on the Estate, but given the promised practicality improvements we’ll forgive it this. 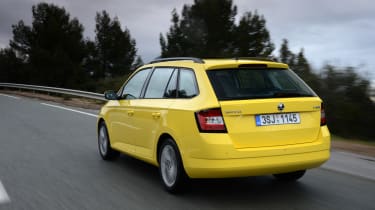 Skoda bosses say the new Fabia uses about 44 per cent of the MQB platform, carrying over a number of chassis components from cars like the VW Golf and Audi A3. Flexibility allows the brand to extend the car’s cabin, which is now 21mm wider and 8mm longer than before – providing space inside for five adults. Knee room is decent and six-footers will find there’s plenty of headroom – even with the optional panoramic roof.

The boot is gigantic too. At 530 litres, it’s a whole 200 litres bigger than the hatch with the rear seats in place, and 245 litres with them folded flat. For reference, that’s just 20 litres smaller than in a Ford Mondeo – a car that sits not one, but two classes above. Yes, the Dacia Logan MCV is larger still, but the Romanian load-lugger can’t come close for interior quality or standard equipment. 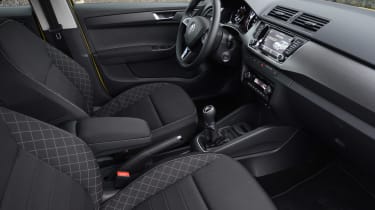 The Fabia feels agile, easy to drive and nippy around town, and from the driver’s seat you’d struggle to discern this Estate from the more compact hatch. It feels just as sprightly as you build speed, and even this lower-powered turbo petrol has enough shove to feel at home on the motorway.

In fact, despite its seemingly insignificant 89bhp, the basic 1.2-litre TSI is actually the pick of the range – and indeed the car Skoda says will be the best seller.

The 1.0-litre feels decidedly lacklustre, so it's hard to recommend, and the 109bhp 1.2 TSI doesn’t offer enough of a jump in performance to warrant the £650 premium over the 89bhp version. The diesels will suit higher mileage drivers, but the turbocharged petrols should offer a great blend of performance versus running costs for most private buyers.

It’s economical too. Combined fuel economy for the 89bhp engine stands at 60.1mpg, with CO2 emissions of 107g/km. That’s identical to the hatch – despite the larger dimensions – and quite a bit more than the 56.5mpg and 116g/km you’ll manage in a similarly-powered Dacia Logan TCe. Those wanting rock-bottom running costs should wait for the Fabia Greenline due in the spring, which is said to be capable of sub-85g/km CO2 emissions. 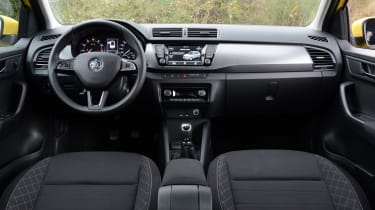 All SE cars also come with leather on the steering wheel, gear lever and handbrake, as well as the handy MirrorLink system that allows you to stream apps such as sat-nav from your mobile phone onto the Fabia’s central touchscreen. The SE L gets keyless go, climate control and LED daytime running lights, but it’ll set you back another £850. 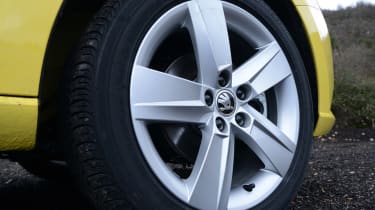 While the Dacia might win the outright space race, the Fabia’s biggest rival is arguably a little closer to home. The standard Skoda Fabia hatchback is between £1,000 and £1,200 less like-for-like, yet comes with exactly the same standard equipment. It offers the same high quality dashboard, the same turbocharged petrol engines and the same impressive fuel economy.

That said, if space is the absolute priority and you want a well built, efficient and good to drive supermini, it’s certainly worth considering. It’s almost as big as a D segment hatchback, despite being a B segment estate – and with that in mind, it offers astounding value for money.