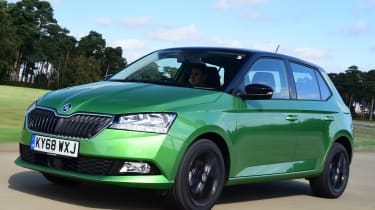 The latest Fabia sports a sharper-edged design than its predecessor, more in keeping with the Mk1. The large Octavia-style chrome grille is distinctive and the deep, crisp side featureline is smart. We also like the ‘kick’ at the base of the rear side window, a feature seen on other Skodas. The changes to the design in 2018 are subtle to even the keenest Fabia fan: the front grille became wider, the lights slimmer, and the back bumper features some extra reflectors. 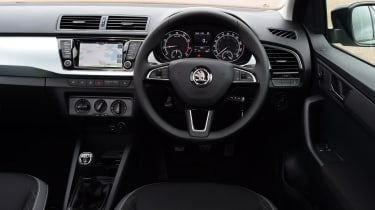 Inside, the dashboard design changed little in the 2018 round of updates. A couple of new interior trims and colours were added, the dials feature revised graphics, while those sat in the back benefit from a couple of extra USB ports. The design itself is a little bland: Skoda chooses to focus on simple, user-friendly designs, so swoopy style is substituted for plain layout and coherency. Straightforward heater controls and big, chunky switchgear familiar from other Volkswagen Group models ensures it’s fuss-free to use, if not as interesting as some rivals. It’s well built but the solid, sturdy plastics aren’t as rich as in a Polo.

Neat features such as a rear courtesy light and front reading lights are standard on all, while SE models feature front fog lights, rear parking sensors and 15-inch alloys, instead of the steel wheels offered on the entry-level S version. 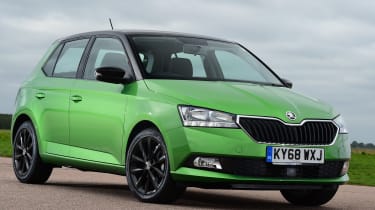 In Monte Carlo trim, the Skoda gets some sporty styling additions, including black 16-inch alloys (although 17-inch wheels are an option costing about £370), while inside there are more supportive sports seats and a three-spoke leather-trimmed sports steering wheel. From 2018 onwards, the top spec car gained LED brake lights (they're optional on other Fabias), with LED headlights becoming an optional extra.

From 2018 onwards, the S gained a 6.5-inch colour touchscreen. Bluetooth and a digital radio are included, although the S lacks a built-in navigation system. SE models feature Smartlink + which enables Apple CarPlay and Android Auto connectivity, while SE Drive and SE L versions include satellite navigation.

The touchscreen system itself is very straightforward to use. The home page presents eight shortcut tiles to the main functions, and physical shortcut buttons surround the screen, so it's always simple to move between sub menus. The slick navigation system offers the driver a choice between the fastest, shortest and most fuel-efficient options. The graphics are clear and bright, too, and loading times are more than good enough. 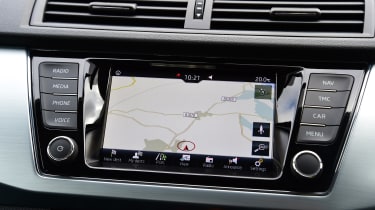 SE cars and above also have an upgraded six-speaker surround sound system from Arkamys. For about £35 you can add voice control to make using the system on the move easier, too.