The flagship Skoda Karoq Edition is as lavish as the new SUV comes, but is it worth the extra money? 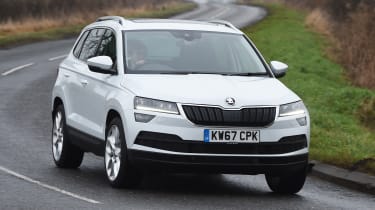 Buyers on the hunt for a new SUV in 2018 will take to the Skoda Karoq, thanks its combination of value, quality, space, and a good driving experience. Its value is diminished further up the range, however. The Karoq Edition is a fine car with strong powertrain options, but at over £30k for this diesel version it ventures well into Kodiaq territory. Lesser models balance price and kit better.

The Skoda Karoq has already proven that it’s a straightforward and capable contender in the crowded small SUV market, thanks to a healthy mixture of no frills practicality and value for money. It’s also a car Skoda has lofty ambitions for, hence the need for a generously-specced flagship model.

Step forward the Karoq Edition. It’s as lavish as the Czech mid-size SUV comes, loaded with most of the tech you’ll find in the larger Kodiaq. The group’s latest 1.5-litre TSI turbocharged petrol engine is available too, but here, we’re giving it a go over in 2.0-litre TDI diesel form.

SUVs of this size are rarely used away from the road, but Skoda is least entertaining the thought with the 2.0-litre TDI Karoq. All-wheel-drive is standard, while the drive model selector also boasts an off-road setting which primes the powertrain ready for low-grip surfaces. The all-wheel-drive system leaves practicality unhampered, with the Karoq’s competitive 479 litre boot unchanged. A six-speed manual gearbox is standard fit, with the seven-speed DSG automatic a £1,300 extra on the options list. 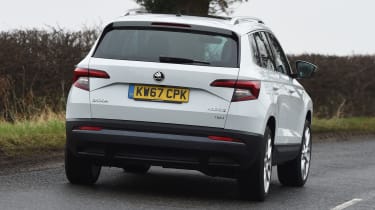 While we’ve yet to really put the Karoq through its paces in the muddy stuff, its on road abilities are as solid as ever. The 2.0-litre diesel gets the most torque of any engine in the line-up at 340Nm, served strongest between 2,000-3,000rpm. Sure enough that generous lump of torque means that it’s the most flexible powertrain in the lineup - albeit the most expensive one - yet with diesel’s popularity only heading one way in Britain it’s unlikely to be the volume seller.

It’s easy to get up to motorway speeds thanks to a respectable 8.7-second dash to 62mph, while it’s also decently refined – the tyre roar produced by the Edition’s low profile tyres and 19-inch alloy wheels is more noticeable on the move than the grumble of the diesel unit under the bonnet.

Our previous encounters have unearthed a safety-first approach to the way the Karoq drives, and there’s no change here. The controls are light and accurate, suiting the target market of such a car. The suspension set-up is softer than the Karoq’s sister car, the SEAT Ateca, meaning there’s less firmness to be felt around town.

It’s by no means perfect – our test car’s 19-inch wheels stealing a bit of additional suppleness in favour of style – but by and large you’ll be very comfortable in the Karoq. It feels at home on British roads, pulling off the delicate act of balancing solid all-speed ride quality without feeling loose or uncontrolled in the bends.

The Karoq’s cabin is a pleasant place to be, too, and Edition models ramp up the luxuries. Leather upholstery is standard, and the modern looking, Kodiaq inspired dashboard is dominated by Skoda’s 9.2-inch Columbus infotainment display. It’s sharp to use with crisp graphics and an intuitive user interface, and features satellite navigation, Apple CarPlay and Android Auto, plus Wi-Fi. However, the gesture control capability will be lost on most users, and the slightly smaller eight-inch system fitted on cheaper models is just as good for most uses.

With the Edition positioned as the range topper it’s unsurprisingly festooned with standard equipment, though it builds on SE L trim with a handful of choice additions rather than an extensive list. A glass panoramic sunroof opens up the cabin to make both the front and back row feel open and lighter, and there’s also LED ambient lighting to give it a classy air. 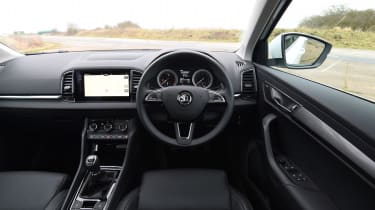 Up front, the driver gets an electrically adjustable seat and door mirrors, plus a wireless charging pad for smartphones located behind the gearstick. Additional driver assists are also included; items such as lane keep assist, blind spot detection and traffic sign recognition.

However, with these additions, the Karoq Edition chalks up a big price tag for an SUV with value for money at its heart. SE L models look better value, both on list price and on monthly PCP deals, as they offer most of the kit you’d reasonably want and expect in this category of car.  If you do want a top-spec model, the 1.5-litre petrol engine is our pick too – it’s just as powerful, nearly as economical, and cheaper to buy.

The coronavirus lockdown is forcing people to drive their cars less, which could be a problem for owners of modern diesels
Visit/news/109089/kia-telluride-named-world-car-year-2020

The Kia Telluride has been named World Car of the Year 2020, beating the shortlisted Mazda 3 and Mazda CX-30
Skip to HeaderSkip to Content