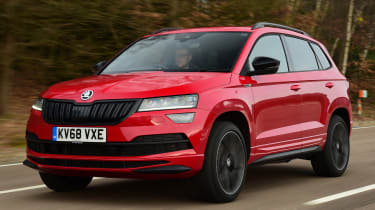 There’s plenty to like about the Skoda Karoq Sportline: the vRS-aping bodykit and 19-inch alloys add visual clout to the SUV’s otherwise conservative nature, while the tried and tested powertrain ensures it’s reasonably engaging to drive. But the large wheels harm ride comfort and ruin refinement, while the high list price means other models in the range represent far better value.

Look towards the top of the Skoda Karoq range and you’ll be presented with two distinct options. For those after the rugged, go-anywhere family SUV there’s the Karoq Scout, while buyers wanting vRS-style trimmings in a sensible package, there’s the new Sportline.

The Karoq Sportline follows in the footsteps of the larger Kodiaq SUV, promising much of the visual appeal of a full vRS performance model, without the associated running costs. In the Karoq, choosing this trim gets you 19-inch alloy wheels and a sporty bodykit with rear diffuser and new bumpers. Elsewhere, the radiator grille, roof rails and wing mirrors are all finished in black. These tweaks lend a pleasing sense of purpose to the otherwise sensible Karoq and are echoed inside, too, where a set of sports seats and aluminium pedals complete the look.

Those sports seats are worth a bit more attention: they’re impressively comfortable and supportive and, on initial inspection, look the part. But while the Kodiaq Sportline gets Alcantara upholstery, the Karoq equivalent makes do with fabric that, while quilted, doesn’t have the plushness you might expect at this price point. 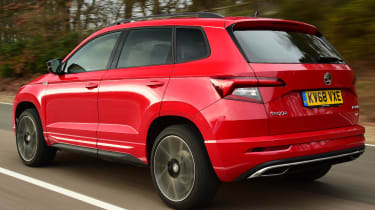 Engine choice is limited to the manual-only 148bhp 2.0-litre diesel tested here, an equally powerful (but less torquey) 1.5-litre petrol, or a 187bhp 2.0-litre petrol engine. All come with four-wheel drive, while the two petrols are paired exclusively with a seven-speed DSG automatic.

Whichever engine you choose, you get plenty of toys. A panoramic sunroof, Skoda’s eight-inch infotainment system with sat-nav, LED headlights, a power-operated bootlid and metallic paint are all standard. The Velvet Red of our test car is an option, as is the impressive Canton stereo.

Push the steering-column mounted starter button and the familiar VW Group 2.0-litre TDI engine fires up with an unmistakable grumble. It quietens down when cruising, but is a fairly gruff companion when pushing on – something the TDI Sportline is rather good at.

With 340Nm of torque, the Karoq is faster than the 148bhp output would suggest. Keep it in second, third or fourth gear and there’s a welcome eagerness to the way this diesel SUV accelerates. And, with four-wheel drive to back things up, there’s never any question of being able to put down all that power, even on greasy roads.

That’s where the good news ends, unfortunately, because while the Karoq Sportline handles neatly, some of its characteristics are likely to frustrate in day-to-day life.

The first is the ride. You may want to exploit the torque and grip on offer, but hustle it with enthusiasm over an undulating road and those big wheels, low-profile tyres and relatively tall stance undo much of the good work. There’s an unwanted jiggle to the ride over poor road surfaces, which you don’t get on less expensive models in the range. 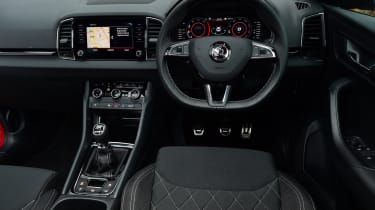 The second issue concerns motorway cruises. At 70mph over tarmac it’s a smooth, quiet performer, but travel at the same speed over concrete sections of motorway and the large wheels combine with the noisy road surface to generate some frustrating harmonics. You’d forgive this trait in a performance car, but it’s less acceptable in a family SUV.

If you’re happy to overlook these shortcomings and fancy the way the Karoq Sportline looks, it remains a relatively sensible choice. Those who would prefer to embrace the Karoq’s otherwise easy-going nature, spacious interior and rock-solid build quality, however, would do best to look elsewhere in the range.

Lesser models represent far better value for money. In fact, you can get the same drivetrain in a seven-seat Kodiaq SE for around £1,000 less – a detail some buyers may find hard to swallow.