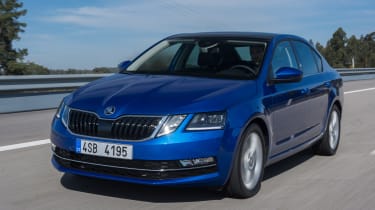 If you haven’t already been won over by the Skoda Octavia’s mix of practicality, comfort and quality interior - not to mention the great-value price tag - then this new model probably won’t change your mind. The changes are pretty minor and if anything, the new headlights arguably look more awkward than before, but there’s no arguing with the Skoda’s impressive range of ability.

While the Skoda Octavia has remained a top family hatchback since this third generation car launched in 2013, it was starting to feel a little dated. Now, however, hot on the heels of the new VW Golf, there’s a new version featuring more in-car tech, a fresher look and more safety kit as well.

At the front, the main difference is the split headlight design, which on some models comes with LED technology. There’s also a new lower bumper that has a longer detail line and raised-up fog lamps. It’s a very subtle facelift, but it brings the car closer to the more modern designs in the Skoda range such as the Kodiaq SUV.

The interior hasn’t changed much at a glance, but the in-car tech has had a big upgrade on the new Octavia. Our car was fitted with a brand new 9.2-inch ‘Columbus’ touchscreen display, which is a superb system and finally brings capacitive touch technology into the car. 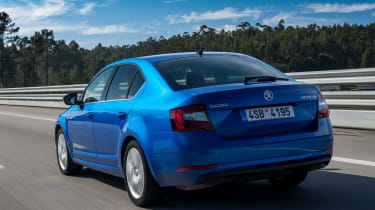 That means it’s just like your smartphone or tablet to use, with the glass screen requiring just a light touch, flick or pinch to control its functions. It’s easy to use, looks great and really adds a modern feel to the Octavia. It even comes with a Wi-Fi hotspot.

It’s not standard on the SE L model we tried, but you can have it as an option and this model does come with an 8-inch screen included. Also thrown-in are adaptive cruise control, front and rear parking sensors, full smartphone connectivity, tinted rear windows and LED headlights.

There’s more safety kit available too, and along with adaptive cruise control there’s pedestrian detection for the autonomous emergency braking system, blind spot warning and a rear traffic alert. If you’re planning to use the Octavia as a tow car, as many do, there’s a new trailer assist feature that helps with steering while reversing. 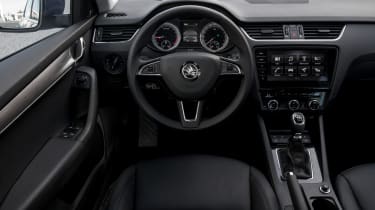 There are no mechanical changes, so the Octavia’s wide range of petrol and diesel engines is still present. Here we’ve tried the 2.0-litre TDI diesel model but there’s also a choice of 1.0 and 1.4-litre petrols and a smaller 1.6-litre diesel.

Even though the 2.0-litre unit has a gruff voice when revved, you can quite easily keep the turbocharged diesel low in its rev range and use the torque when you need to speed up. The slick six-speed manual means changing gear is no hardship, though, and it’s quieter than the droning 1.6-litre diesel version.

Driving the Skoda Octavia isn’t the most fun you can have in this class - rivals such as the Ford Focus, SEAT Leon and Vauxhall Astra are better in the bends - but the Skoda will suit those looking for something a bit more comfortable and practical.

While the steering weight is well-judged, it’s not very communicative and the supple suspension means the Octavia doesn’t feel as composed in turns as some of its competitors.

For the best balance of driving fun, ride comfort and refinement you should consider the 1.0-litre petrol model. Though the 2.0-litre diesel rode smoothly on Portuguese roads, the lighter petrol was marginally better, and it’s more fun to rev while still having plenty of low-end power as well.

For economy, it’s the diesel that makes more sense: economy of 65.7mpg and emissions of 113g/km mean it’ll be cheap to run for those who do longer journeys.

Whichever engine you go for, you still get one of the most spacious cars in the family hatch class. There’s 590 litres of boot space, or 1,580 litres with the rear seats folded down. That’s much more than the 380/1,270-litre figures for the new VW Golf - and handy features like a hidden section under the boot floor and a 12V socket mean it’s easily one of the most practical hatchbacks you can buy.

There’s loads of space in the cabin as well, with the rear seats easily big enough for tall adults to sit in comfort. Three kids will fit across the bench without a fuss, while front-seat passengers have plenty of seat adjustment options and storage spaces as well.