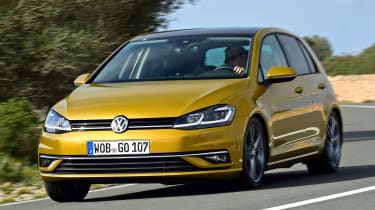 The new Golf and its new 1.5 engine are a very strong match, delivering a strong blend of refinement and performance - and the increased connectivity adds some zing to a nicely finished cabin. The overall package is still trumped by a Skoda Octavia on space and, potentially, a SEAT Leon on price. But if the deals on the more modest Golfs cut down their monthly costs, then we can easily see some of them earning a full complement of stars.

The VW Golf has been the default family car choice for generations – thanks to its hard-to-beat combination of practicality, comfort, performance and efficiency. The seventh generation of Europe’s best-selling car has been around since 2014, though, so VW has now given it a thorough mid-life overhaul.

Ostensibly called the ‘Mk7.5’, the new car gets tweaks to its styling, with a revised front bumper and the option of LED headlights, plus LED tail-lights on all editions. It is still clearly a Golf - but then, this has always been a car whose styling has evolved in small steps instead of huge leaps.

Indeed, this Golf has the same MQB-based chassis as the outgoing version, so its internal dimensions and boot capacities - 380 litres, or 1,270 litres with the rear seats folded down - remain unchanged. More significant are its new in-car technologies, plus fresh four-cylinder petrol engines that promise to improve the Golf’s appeal in the wake of the Dieselgate scandal.

The biggest changes come in infotainment; even the most basic Golfs now get an eight-inch colour screen instead of a six-inch display, while the range-topping Discover Pro system moves from eight inches to 9.2 inches. Its resolution increases too, from 800x480 pixels to 1280x640 pixels, to give even more precision and crispness to the display. 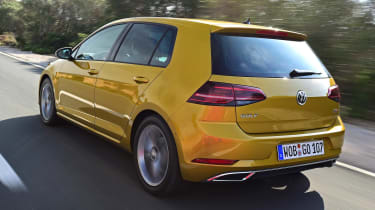 In addition, VW has tweaked the motion sensor in its biggest screen - the component that allows it to pop up relevant menus when it detects your hand moving towards it - so now you can use gesture controls as well. You can ‘swipe’ your hand left or right without touching the screen to move through various menus – including playlists and radio stations.

And in situations where someone else in the car wants to control the system - from the back seats, in particular, the two upper-level systems - Discover Media and Discover Pro - can be accessed via a smartphone app.

The other new features are focused on driver assistance. That includes everything from semi-autonomy in traffic jams – where the car can now mix its lane departure warning and automatic distance control – to Trailer Assist, which uses the rear-view camera to make it easier to reverse a trailer into a space.

The new petrol engine is a 1.5-litre TSI unit. In our car it produced 148bhp, although a more efficiency-focused 129bhp version of the same motor is under development. In the more powerful spec, the engine shuts down cylinders when cruising to save fuel; the ‘eco’ version can turn itself off completely to ‘coast’ along.

Although this variant won’t technically go on sale until the third wave of ‘new Golf’ arrives in late spring, you can order 1.4 petrols, and 1.6 and 2.0 diesels. The entry-level variant, equipped with an 84bhp 1.0-litre three-cylinder motor emitting just 108g/km of CO2, goes on sale in March. The same engine is also available with 109bhp, incidentally, emitting just 109g/km as a manual or 107g/km with a seven-speed DSG automatic gearbox. 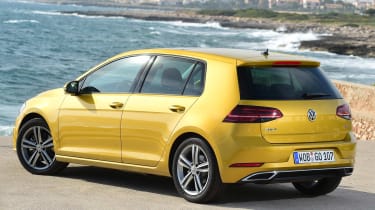 Like before, there’s also the GTE hybrid edition, which mixes a 1.4 petrol with an electric engine. Soon, VW will update its all-electric e-Golf to offer around 180 miles on a single charge. VW points out that the Golf is the only model on sale to offer the full gamut of powertrain options: petrol, diesel, hybrid and pure electric.

The faster Golfs get a boost too; the GTI now produces the same output as the old GTI Performance edition - 227bhp - while the R gets a nudge upwards to 308bhp. If a rapid diesel’s your thing, the 2.0-litre, 181bhp GTD edition can crack 0-62mph in under eight seconds while emitting less than 130g/km of CO2 - or less than 120g/km if you go for the GTD Blueline on smaller wheels and a manual gearbox.

All cars get air-con as standard, along with that eight-inch colour touchscreen with USB connectivity and DAB. Also included are the aformentnioned LED tail-lights, LED daytime running lights, a cooled glovebox and predictive pedestrian detection. 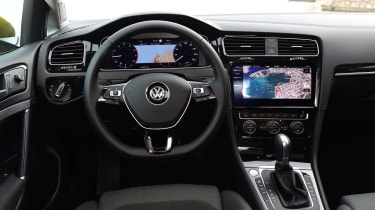 Volkswagen is being bullish on pricing; it claims there’s an average reduction across the range of around £600 model for model, and the entry point - the 1.0-litre 84bhp three-door in S trim - will cost the same as the previous one (£17,625), despite the improved spec. In practice, the usual mix of keen finance rates and chunky balloon payments will mean the Golf scores strongly on three-year costs - assuming you’re willing to replace it with another VW after that period instead of taking full ownership.

The new 1.5-litre engine represents a colossal investment from the VW Group - and it appears to be worth every penny because it’s remarkably effective. Its 148bhp and 250Nm are delivered in a quite restrained fashion - don’t expect a diesel-esque surge under acceleration - but it’s happy to spin quite freely and smoothly up to 6,000rpm. In everyday use, though, you won’t need to go anywhere near that point, because there’s more than enough in the low and mid-range to deal with most situations; shift up at 3,500rpm and you’ll still be making pretty brisk progress.

The motor’s star turn, though, are its acoustics - or rather, the lack of them. Once you’re up to a cruise it’ll pull little more than 2,200rpm and at that point, you won’t hear it. You won’t notice it shutting down cylinders as you cruise along, and at 80mph, you won’t really hear it at all.

This composure is so impressive that you may even be irritated by wind noise (particularly from around the side mirrors) and a bit of resonance coming up through the chassis from the road - and neither of those has ever been marked out as an issue with this Golf. But even with these mild irritations, it is hard to imagine when a mainstream family car has ever been this refined. 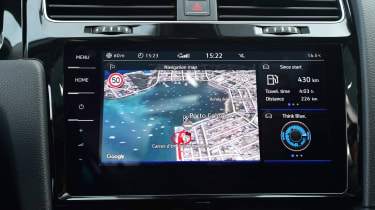 The rest of the dynamic package is the same sensible compromise that we’ve praised before. No, the Golf is not the last word in agility, but it felt impressively comfortable over some pretty poor surfaces on VW’s test route in Mallorca. It keeps body roll in check through the twistier stuff, too. The steering is consistently weighted and quick enough to respond, and while the new seven-speed DSG transmission is still prone to the odd jerky shift, it generally feels like it’s on your side. The six-speed manual is unchanged, incidentally, so it still has a pleasingly slick mechanism.

Inside, the Golf’s upgrades undoubtedly bring a bit of glitz - but we can’t help wondering if a teeny bit of the usability has been sacrificed. The interior finish remains as polished as ever, with soft-touch materials in all of the important places, including padded fabric on the door armrests.

The big shift is in infotainment, though, and it’s in this area where the Golf scores both hits and misses. Our test car had the Discover Pro 9.2-inch navigation screen, and in pure hardware terms, it’s a triumph; if you’ve made the step from a regular smartphone screen to a Retina display, you can expect a similar sort of feeling when you look at the VW’s crisp screen graphics. 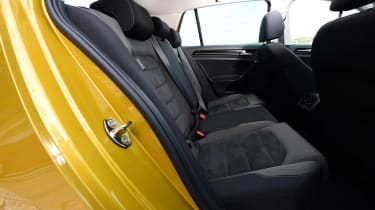 The interface is, in general, slick enough - and the system is quick to respond to inputs, so the processor behind it all clearly has enough grunt. However, the lack of physical ‘hotkeys’ down the sides of the screen means that if you’ve maximised any one function to fit the whole display, you’ll need to hop through at least one additional menu to get between major areas of the system – such as from navigation to radio or car settings. Pinching to zoom in and out of the navigation map is fiddly, too.

Gesture control is even less successful. Perhaps it would become more reliable through practice and experience, but when you’re on the move, it’s much easier to stab the screen once than to wave your hand in front of it half a dozen times in ever-decreasing anticipation of the system doing something. File this one under ‘G’ for ‘Gimmick’; it’s a surprise that something so devoid of reliable, practical use made it on to this most rational of models.

Car-Net is a much more credible addition; as well as ringing the emergency services if the airbags are deployed, the system can notify your mobile phone if anyone is trying to break into the vehicle. And when you’re on the move, the range of real-time information services it offers - everything from fuel prices nearby to parking costs and availability - is precisely the sort of small details that Golf owners could find useful.