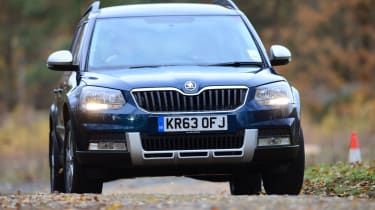 What were the cars that caught your eye and sparked your interest in 2013? We've trawled through the Auto Express website stats and found the top 10 most popular car reviews of the year.

What are your top 10 favourite cars of the year? Let us know on our Facebook page.

1 Skoda Yeti Auto Express users have always been keen to read about the Skoda Yeti, but a mild facelift towards the end of the year was just enough to squeeze the SUV ahead of its closest rival in this list, the…

2 Range Rover Sport  Daniel Craig was on hand at the glitzy, star-studded launch of the all-new Range Rover Sport in New York in March. But once the stardust had settled, you couldn't get enough info on the Range Rover Sport. We rather like it, too, as it also claimed second place in our Best 4x4s.

3 Volkswagen Golf  The latest-generation VW Golf ticks so many boxes – it's stylish, spacious and has a good boot size. It also gets a range of economical engines and it's very well equipped. Our VW Golf review is the first stop for many of our website visitors – it's the car against which many others are compared.

4 Mercedes A-Class  The launch of the A45 AMG earlier this year helped boost interest in the whole A-Class range, helping this smart BMW 1 Series rival to fourth place in our list. Sexier, sleeker and better to drive than the dumpy mini-MPV it replaced, the new A-Class has been a favourite throughout the year.

5 BMW 4 Series  We only got behind the wheel of the of the new BMW 4 Series in July, but in less than six months, it's become a firm favourite on the site. We rated it highly, too – it was one of the few cars to get a five-star score from our testers.

6 Jaguar F-Type  It didn't take us long to find out that the Jaguar F Type is one of the very best sports cars you can buy. It seems you love it as well, with the classy convertible coming sixth in our list. You like your quality cars, too – it's another five-star car in this top 10.

7 SEAT Leon  We crowned the SEAT Leon as our car of the year in 2013, which no doubt helped this stylish hatch get into our top 10 most popular reviews. Like the mechanically similar Golf, it’s stylish yet practical – but crucially it's cheaper.

8 Ford Fiesta  It's hardly surprising that the UK's biggest-selling car in 2013 is also one the busiest reviews on Auto Express, but like the A-Class with the A45 AMG, the arrival of the Fiesta ST really gave the Fiesta push up the rankings to get into our top 10.

9 Nissan Qashqai  One of the original crossovers, the Nissan Qashqai is also one of the best, but the launch of an all-new Qashqai in November lit up the stats on Auto Express. You won't have to wait long for our verdict on the new Qasqhai – we’ll be driving it in early January next year.

10 Mercedes CLA  The Mercedes CLA is essentially a mini version of the CLS – sharing the same swoopy, sleek lines of the executive car. But it’ll appeal to younger buyers, and if standard CLA is a bit tame for you, the CLA 45 AMG should quicken your pulse. This performance model probably helped the standard car squeeze into 10th spot in our list of best cars of 2013.