With only the two-seat ForTwo and Roadster in its line-up, Smart never had a chance to establish itself as a family favourite 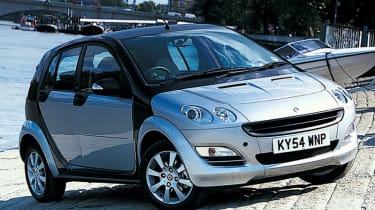 If you were worried that Smart's biggest-ever model would lose the magic of the rest of the line-up, rest easy in the knowledge that the ForFour is brimming with character. Available with a decent range of engines and a practical cabin, the ForFour is great to drive and looks good, too. As long as you can resist raiding the options list, it's not too expensive either.

With only the two-seat ForTwo and Roadster in its line-up, Smart never had a chance to establish itself as a family favourite. But that is changing, thanks to the introduction of the practical five-seater Smart ForFour (a four-seat edition is also available).

Auto Express got hold of the very first model to be registered in the UK to see if the youthful brand really can be grown up. Like all Smarts, the ForFour isn't beautiful or sleek, but its cheeky bulges and curves draw you in and hold your interest. You've only got to look at the way children stare at the ForFour to see that its shape appeals on a very basic level.

Line it up next to Mitsubishi's more conservative Colt, which is based on the same underpinnings as the Smart, and you start to admire the German firm for sticking to its quirky principles.

What's more, the designers lost none of their flair when it came to crafting the interior. The attractive dash- board is well laid out, but what is particularly impressive is that the build and trim quality issues of the Roadster are nowhere to be seen. In fact, much of the switchgear is taken from Mercedes' parts bin, giving the cabin a premium feel.

But the whole point of this Smart is that it offers practicality, so plenty of thought has been put into the rear seat arrangement, too. It has a conventional 60/40 split, but the entire rear bench can be slid backwards and forwards to increase legroom or bootspace.

While passengers in the back have plenty of headroom, the tapered window line cuts into the available shoulder space, and gives a claustrophobic feel for taller occupants.

But the point at which people normally decide whether they love or hate a Smart is when they get behind the wheel. The ForFour is the first model in the firm's history to have a conventional manual gearbox, which gives a three-pedal set-up to those who can't get on with the clutchless transmission which has split opinion in the rest of the range.

What's more, the new manual has a slick and precise action, and is light and easy to use around town. Once on the move, it's clear that the company was keen to lose none of the character of its other models.

The steering will be too light for some, but A and B-roads pose no problems to the tidy-handling ForFour - it's no hot hatch, but the chassis is well up to the standard of most rivals. Our test car came with the entry-level 75bhp 1.1-litre three-cylinder powerplant, and it provides a buzzy engine note and surprisingly swift performance.

The good news is that the ForFour doesn't seem to have adopted the steep pricing of its siblings. Our test model weighs in at £8,995, while entry-level variants are available for only £7,995. Far from corrupting the brand, the ForFour shows that Smart design hasn't been ForGotten...