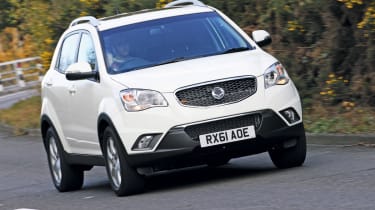 Brand new SUVs don’t come much cheaper than the SsangYong Korando. Even entry-level offerings from rivals can’t match its ultra-low price tag. But the Korando lacks the driving dynamics and interior quality of others. In comparison, it feels cheap and noisy in a market that’s full of impressively refined budget off-roaders. So it’s very hard to recommend.

SsangYong is back in the UK after a four-year absence, and it’s hoping to turn over a new leaf with the all-new Korando SUV.
This car is a revolution for the company for several reasons. Firstly, it features a look penned by Italian design house Giugiaro that should appeal to European tastes, and while it’s not very exciting, it is clean and stylish.
Secondly, this is the first SsangYong with a monocoque chassis, so it should be a step up in terms of dynamics, too. On the move, it soaks up lumps and bumps without fuss, but the payoff is poor body control – the car rolls through corners more than it should. Matters aren’t helped by vague steering that’s slow to respond.

There are problems with the 2.0-litre SsangYong turbodiesel engine, too. It tends to clatter on start-up and sounds noisy and rough under acceleration. Our car had an automatic gearbox that juddered between first and second gears, but was otherwise smooth.
On the plus side, the 173bhp engine allows acceleration from 0-62mph in a brisk 9.9 seconds. Considering the four-wheel-drive set-up and auto box, economy isn’t bad, either, at 37.7mpg.
Prices start at £16,995, so the Korando isn’t a premium product as the drab interior proves. Yet Hyundai’s ix35 has the same starting price but far fewer hard plastics. This new car has a few quirks, too – for example, you get one key for the ignition and another for locking and unlocking.
Practicality is not an issue, as there’s plenty of space inside. The 486-litre boot is one of the biggest in the class – 70 litres more than in a Nissan Qashqai.
The £22,995 car we tested is the most expensive Korando in the range. For that price, you get heated electric leather seats, parking sensors, alloys, cruise and climate control, a sunroof and lots more.
If you were to equip an ix35 to the same level and with similar performance it would cost £1,400 more. Unfortunately, value is about the only thing the Korando has in its favour.
Share this on TwitterShare this on FacebookEmail