Minor upgrades, generous equipment and a value price-tag make this the best Korando yet 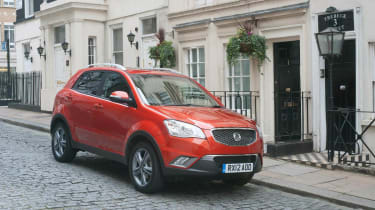 The Korando has class-leading towing ability, attractive styling and – in the LE specification tested here – represents amazing value for money. You won't find any other car in this class that matches the amount of equipment and performance that the Korando offers at this price-tag. The trade-off comes in the quality of materials used in the cabin, the jittery ride and the engine, which has been improved but is still noisy compared to other cars in this class.

Last time we drove the Ssangyong Korando we had a few criticisms about its refinement, but the brand claims to have sorted these issues and has also released the well-equipped LE model tested here.
SsangYong has re-programmed the ECU to help improve performance and reduce engine noise, which doesn’t sound like a lot but the difference is certainly noticeable. The 173bhp 2.0-litre diesel engine sounds immediately less rattly – though still noisy – and power delivery is smoother and more consistent than before too.
The statistics remain the same though, with a 0-62mph time of 9.9 seconds and – in our front wheel-drive model – fuel economy of 47.1mpg.

The last time we drove the Korando it was fitted with an automatic gearbox, which spoilt the experience with its juddery shifts between first and second gears. SsangYong claims to have fixed the problem but our car was fitted with a six-speed manual so we won’t know until we can test it.
Unfortunately SsangYong hasn’t altered the way the Korando rides. The suspension doesn’t soak up rough roads in the same accomplished way most small off-roaders do and the body rolls too much in the bends too.
The interior is simply laid out and some thought has been put into the design but the quality of materials falls short of rivals, particularly the hard and scratchy plastics on the doors and dashboard.
That could be a sacrifice worth making when you consider the Korando LE costs just £17,995 – a price-tag which includes electrically adjustable heated leather seats, parking sensors, 18-inch alloys and automatic air-con.
Consider that a Nissan Qashqai 1.6dCi 2WD Acenta costs £21,295 and you realise just how cheap the Korando is – especially taking into account the fact that the Qashqai still doesn’t come as standard with 18-inch alloys or heated leather seats.
The SsangYong has been improved and in LE specification it’s also better value than ever. Admittedly the ride, refinement and cabin quality are still some way short of rivals but a Korando that is £3,300 cheaper than an equivalent Qashqai, and better equipped too has got to be an appealing proposition.
Share this on TwitterShare this on FacebookEmail