You're unlikely to fall in love with the SsangYong Tivoli, but it's certainly good value for money 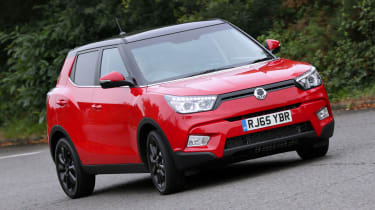 SsangYong reverses Tivoli to say 'Ilovit', with the emphasis on ‘lov’ and while it’s unlikely you’ll really fall for it in a big way, it’s impossible not to admire what the Tivoli offers. Put simply - value, though without the trade-offs that once came with that. It's good looking, well built, tremendously specified, spacious and a commendable, if unexciting drive, making the Tivoli appealing, even more so now it’s available with a diesel engine.

SsangYong surprised all with the Tivoli. The Korean brand, more usually associated with big-value, rugged 4x4s that appeal to those needing working vehicles, added the Tivoli, a compact crossover to compete against an ever-growing list of rivals. Key among them is Nissan’s Juke, the car that kick-started the segment, and the Tivoli is chasing that class leader, much harder than might have been expected.

The compact crossover is defined by sharp design, and the Tivoli has looks on its side. Without a brand ‘family style’ to strictly adhere to SsangYong’s designers have had free rein to give the Tivoli its own appearance, and it’s an extrovert look. It’s mostly effective, too, even if the Tivoli is a touch busy in its detailing, but in this marketplace it pays to stand out. 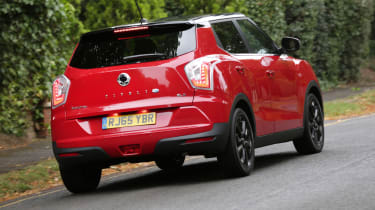 It looks its sharpest in ELX specification as tested here, where it gains rear tinted windows, a rear spoiler and diamond-cut alloy wheels, though you don’t have to spend top-specification money to get a lengthy equipment list. Even the entry-level SE comes with 16-inch alloy wheels, LED daytime running lights, LED rear lights and body coloured door handles.

So it’s a great value proposition, with exceptionally generous levels of equipment. Usually there would be a trade-off to pay for that, but the Tivoli bucks that trend, as the interior is finished well in quality materials. EX and above come with leather upholstery and a seven-inch touch screen as standard too.

Start exploring out of sight areas and you’ll find the odd hard plastic component, but that’s true of all its rivals, and the Tivoli’s interior is comparable to the best of its competitors'. 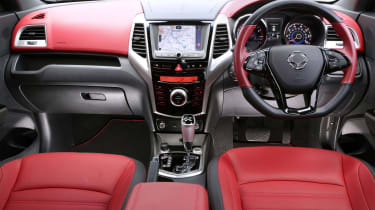 What is also apparent over and above the decent feel and look to the interior is the space the Tivoli offers. There’s loads of it, the Tivoli’s cabin among the most generously proportioned out there. There’s room for a pair of six-footers to sit behind each other comfortably and while the rear middle seat is a bit tight on shoulder room, there’s good foot space thanks to a nearly flat floor.

The boot is deep too, though unlike most competitors you have to pay extra for an additional raised boot floor. Shame it comes with a bulky underfloor moulding that removes much of the useful space that should lie beneath. It does make for a lower lip to negotiate luggage over, however, and creates an entirely flat floor should you fold the rear seats down.

We’d sampled the 1.6-litre petrol model before and it found it lacking in mid-range urge. That’s addressed by the new 1.6-litre turbodiesel, which produces up to 113bhp and, more significantly, 300Nm of torque - nearly double the twist on offer from the petrol engine. That makes the Tivoli a far easier drive, with plenty of low-rev performance; its power delivery is smooth and commendably free of vibration or noise. 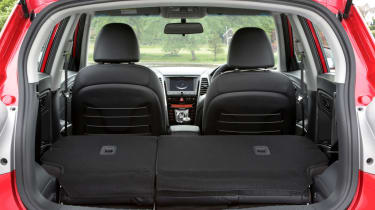 Read the specification sheets and it’s no quicker than its petrol relation with the same 12-second 0-62mph time, but that number doesn’t illustrate the greater flexibility on offer, making for a quieter, less frenetic car not just around town, but on the motorway too.

The diesel Tivoli retains the 'Smart' steering system of the petrol model, which offers three settings from Comfort through Normal then Sport, but it's best left in Comfort as the other settings do little but increase weight - and even then very marginally so. The Tivoli isn’t a car you’re likely to be chucking around, either; it’s a competent, if unexciting drive, with an accurate six-speed shift (the optional six-speed auto is usefully smooth, too) and the ride composed in most situations but getting a bit bouncy on rougher surfaces. 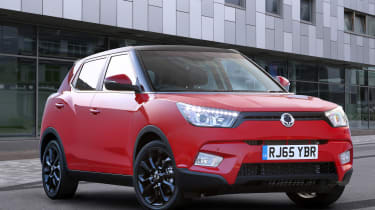 That should improve when the Tivoli range gains its 4x4 versions later in the year, as they also feature more sophisticated multi-link rear suspension, but few will be disappointed with how the front-wheel drive Tivoli diesel drives. SsangYong reckons around 60 per cent of Tivoli sales will feature the new turbodiesel engine, though factor in the 65.7mpg and 113g/km CO2 it offers over the 44.1mpg and 149g/km of the petrol version and we’d be surprised if it doesn’t sell more.