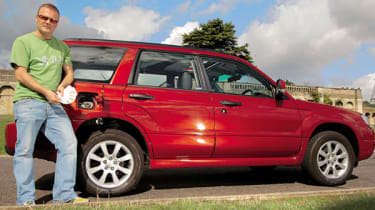 It can be thirsty work driving a Subaru, as I've found to my cost! Put simply, our long-term Forester is a greedy-guts when it comes to petrol.

This would be more forgivable if it was one of the Japanese firm's performance models, but we expected better from a chunky 2.0-litre automatic estate.

Instead, we've struggled to top 24mpg - not good when the claimed combined figure is more than 30mpg. The chief culprits seem to be the auto box and the fact that the engine struggles to power the 4x4's bulky body. Anyone who's driven it has complained that although the revs scream round to the red line, the result is lacklustre performance as the outdated four-speeder sluggishly kicks down.

This is a problem not only when pulling out into busy traffic or at roundabouts, but also when trying to find a happy cruising speed. If we were planning to choose again, we would go for the manual; not only is it quicker, but it gives you more miles for your money, too.

One thing we can't complain about, though, is the Subaru's reliability. Despite a couple of hesitant cold starts during last winter's freezing weather, it's been exemplary. And fuel apart, it hasn't proved too expensive to run, either. The only time we've had to fork out was for a 12,000-mile service (£170.08) and a small paint touch-up job. This was thanks to someone scraping the rear bumper in a supermarket car park. The wing mirror acquired a small scratch, too. However, Cheam Motors in Ewell, Surrey, sorted it all out for £88.94.

With an ever-increasing number of people taking to scooters and bikes in cities, I've welcomed the size of those large wing mirrors, as well as the narrow roof pillars. These make it easy to spot motorcyclists nipping up beside me in traffic.

After 15,968 miles, the Subaru is leaving our long-term fleet, and while it's become a familiar sight to me, I haven't noticed many other facelifted Foresters on the road. In fact, I've seen only one!

I will miss ours, though, as it's been a good companion on my 10-mile daily commute. I have been able to make the most of the summer months thanks to the huge sunroof. Last winter wasn't a problem, either, due to the heated seats and power-ful screen defroster. During the ice and snow, the fact I live on a hill proved no problem for the all-wheel-drive estate, as it pulled up the steep incline with aplomb, while neighbours had to wait for the road to be gritted! Still, while it's been a capable performer, I won't miss those fuel bills.

Second opinion I borrowed the Forester for a camping trip to the Isle of Wight, and was impressed with its load-lugging ability. While not boasting the largest stowage area in the estate class, it easily swallowed our kit, and the high boot lip proved a comfortable and dry place for me and my passengers to sit in when the heavens opened. However, like Gary, I found the auto gearbox ponderous at times, and the engine struggled to keep pace on fast stretches of motorway.Marc Mustard, staff writer