The latest Forester is aiming to reinvent itself as a compact SUV. 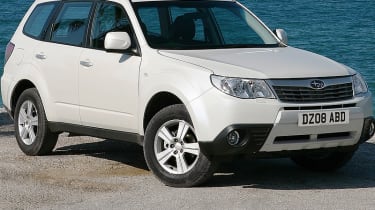 Driving For now, the Forester comes with only one engine option – a 148bhp 2.0-litre flat-four petrol that, despite its power output, sounds and feels strained. It has neither the low-down grunt or top-end fizz to make the Forester entertaining, and it’s even worse when mated to the erratic four-speed automatic. The five-speed manual is the better option. The handling also lacks sparkle. The finesse of the Impreza-based permanent four-wheel-drive chassis shines through occasionally, but there’s too much body roll and pitch through the corners. At least it cruises quietly on motorways.

Marketplace Subaru shocked us with the launch of the current-generation Forester. The all-new model takes on the appearance of an SUV, rather than the previous version's rugged estate car look. Mainstream appeal is what Subaru says it is chasing – while hoping that the move won’t alienate traditional buyers. Hawk-eye headlights and blistered ridges above the wheelarches are a nod towards individuality, but the overall design is lacking inspiration. Offered in either X or XS trim, The Forester badly needs the forthcoming 2.0-litre turbodiesel boxer engine. At present it struggles to compete with rivals including the Skoda Octavia Scout and Volkswagen Passat estate 4MOTION -  not to mention base versions of the Honda CR-V, Ford Kuga, Volkswagen Tiguan and Toyota RAV4.

Owning Inside, the Forester uses the same dashboard from the Impreza. It is hard and scratchy, but there is no question mark hanging over the Forester’s build quality. It feels solid and enduring, as all Subarus do. Equipment levels are good for the money and, courtesy of a longer, wider and taller body, it offers more space inside than ever, too. Subaru has stretched service intervals and given the Forester very competitive list prices. It’s just a shame the company can’t do anything about the petrol engine’s high fuel consumption and poor CO2 figure.