The Forester has never been a fashion icon, but a mid-life update in 2016 gave it a fresh look 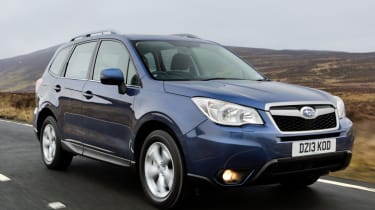 Subaru prides itself on its engineering pedigree, which means that form often follows function. The Forester doesn’t stand out from its rivals, but it’s not a bad looking car. Its curvaceous bumpers, swept-back headlights and gently sloping roofline soften the bluff shape of its predecessor, and also help to cut aerodynamic drag.

Subaru gave the Forester a mid-life nip and tuck in 2016, to keep it looking fresh alongside more modern rivals. All cars got a redesigned grille, updated headlights and some chrome trim on the bumpers. A giant bonnet scoop used to mark out the Turbo model in the 1990s, but that is no more. Instead, all cars have a creased, aluminium bonnet, while top-spec cars have large but purely cosmetic gill vents in their front bumpers and 18-inch alloys.

The interiors of all cars are very similar to the Subaru XV. That means build quality is good, but it can’t match premium rivals for upmarket appeal. Not only does the design look a little dated, there are very few soft touch materials to help lift the ambience. 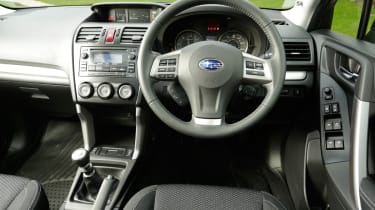 Still, there are no complaints concerning the amount of standard kit, with all models getting air-conditioning, Bluetooth connectivity, heated seats and cruise control. XC and XE versions add climate control, a rear view camera, powered seats and xenon headlamps, while upgrading to Premium brings leather trim and sat-nav.

The X Mode is a useful bit of kit on automatic models, as it distributes torque evenly between all four wheels to prevent wheel-spin on loose or slippery surfaces. It only operates at low speeds as it disengages automatically above 25mph, but it could make all the difference on the wet grass car park at the pony club.

The updated Subaru Forester is fitted with a new 7.0-inch touchscreen, which is far more responsive than the old system.

The standard audio set-up is a six-speaker system with DAB radio and single CD player. There’s a voice command system on all models but the base 2.0 DX diesel, while all models feature steering wheel controls to supplement the touchscreen.