The Impreza has greater practicality and a higher-quality interior but bland exterior styling. 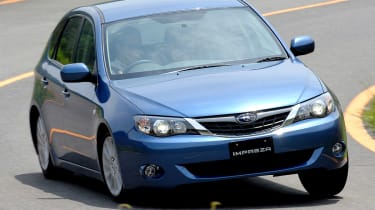 In creating an all-new version that has greater practicality, a higher-quality interior and an improved ride, Subaru bosses have succeeded in maintaining the Impreza's credibility as a very good car. The trouble is, thanks to the bland exterior styling and lack of improvements to performance, current Impreza owners - especially those who run a WRX - now have nowhere to go. Except perhaps to their local Mitsubishi main dealer to place an order for a Lancer.

If you thought that the design of the infamous 'bug-eyed' Impreza back in 2000 was brave, or that the current generation looked too retro, feast your eyes on the car's all-new styling!

Inspired by the Toyota Corolla and BMW 1-Series, the newcomer is not just a radical departure, it's downright ugly, too. Although the bodywork is neatly finished, the nondescript nose and bulbous rear are a world away from what has gone before.

Sadly, the bad news doesn't end with the design. A turbocharged WRX model (expected to account for more than half of all Impreza sales in Japan) isn't even coming to the UK.

So when the car arrives in September, British buyers will be limited to a choice of 1.5 and 2.0-litre non-turbo models. A flagship 2.5-litre will follow soon after, yet fast Impreza fans must wait for the cleaner STi-badged model, due in 2008, to get their turbo fix.

But what's the new Subaru like on the road? The vocal 108bhp 1.5-litre engine is gutless at low revs. The five-speed manual box is slick and smooth enough, while the clunky four-speed auto, with its lengthy ratios, has difficulty making the best of the power.

The 2.0-litre unit is taken from the maker's Legacy. It produces 136bhp, plus 186Nm of torque at 4,400rpm, and when mated to the four-speed automatic, is better to drive than the 1.5. But it still feels underpowered.

Happily, the Impreza's handling has lost none of its magic. Revised suspen-sion means the car remains stable and well balanced even through tight corners. The steering offers a good blend of weight and feel, and is very respon-sive thanks to its quicker rack and the car's smaller turning circle.

The Impreza's disc brakes provide plenty of stopping power, and over uneven surfaces, the chassis displays the same supreme combination of comfort and agility which made the saloon versions so popular.

The seats are comfortable, while telescopic adjustment has been added to the steering wheel tilt control, mak-ing a perfect driving position easier to find. Behind the wheel, you forget about the exterior styling, too. The dash design is similar to the good-looking layout in the Tribeca SUV, with a swooping centre console and polished aluminium-effect inserts.

So, although the latest Impreza is unlikely to scoop any awards for its design, it does remain a good car to drive, while inside, the company has brought about a noticeable - and much needed - improvement.

The question is, will UK drivers still be as keen as ever to get behind the wheel? In the absence of the turbocharged models, we're not so sure. Roll on 2008, and the all-new STi.