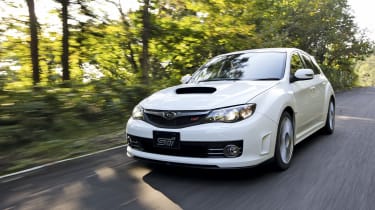 The Impreza STi handles brilliantly, but the 20th Anniversary Edition is simply sensational. In fact, it has so much grip that it shows the STi could cope with more power. While it’s likely to be a rare sight in the UK, its underpinnings could appear on other Imprezas and Foresters in the near future.

Under the bonnet lies a Japanese-spec 304bhp 2.0-litre turbo engine – which boasts 9bhp more than the UK-spec 2.5-litre STi. What’s more, the handling has been improved to make the most of the grunt available. It gets stiffened front wishbones, new anti-roll bars and retuned dampers and springs.

The results are incredible. Thanks in no small part to the newly revised suspension mounts and bushes all-round, the car resists understeer, turns in faster and stays flatter than the standard version. It’s more stable under heavy braking, too, and can corner at least 10mph faster than the present WRX STi. What’s most surprising is that it manages to do all this while still delivering decent ride quality.

And that’s something Subaru admits. Chief engineer for the new model, Hideharu Tatsumi, told us that the car could do with even more torque, especially at low speed when accelerating hard coming out of second gear corners. However, with a 0-60mph time of 4.9 seconds, the STi is anything but slow.

Still, it’s the handling that dominates the experience. The 20th Anniversary Edition is on a par with the greatest STi of the previous generation, the tongue-twisting Spec C Type RA-R, and rewards drivers, regardless of their abilities. It’s a shame that all 300 limited-edition models are destined for Japan, but interested buyers might be lucky enough to find an importer interested in bringing a handful to the UK.