Subaru turns up the heat with power hike for ultimate hatch 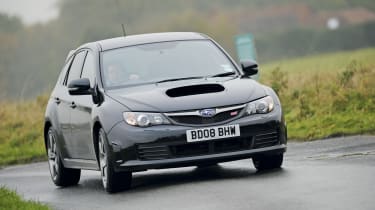 The 330S is the best new Impreza, offering savage pace from a more powerful turbo engine. Cabin quality is impressive, too, while those gorgeous alloys and quad exhausts enhance the looks. In corners, any driver will be flattered by the supple chassis and electronics, but the vague steering lets down an otherwise beautifully engineered machine.

When the latest Subaru Impreza arrived on the market, it divided opinion like never before with its conservative, hatchback styling and softer driving experience. But could this be the variant to change all that, and win back the hearts of enthusiasts in the UK?

The STi 330S is the fastest, most potent model that the Japanese firm officially offers – and with 325bhp and 467Nm of torque from its 2.5-litre turbocharged engine, it’s got 29bhp and 64Nm more than the standard machine.

In true Impreza style, the power arrives with a thump once the turbo comes on boost – quite unlike the more linear delivery in its Mitsubishi Evo X rival. There’s masses of grip from the four-wheel drive, and thanks to rally-style limited slip differentials front and rear, cross-country pace is astonishing. But it’s the savage crescendo as the engine builds towards the 8,000rpm red line that really gives this car its character.

While the suspension is predictably firm, the 330S rides well, soaking up bumps yet keeping body roll in check. Equally well judged are the powerful brakes and chunky, mechanical gearshift.

It’s just a shame the steering doesn’t offer the driver more feedback – it feels curiously light in your hands at high speeds. Marking the 330S out from the regular 296bhp STi inside are even more supportive Recaro bucket seats and sat-nav, while on the outside are 18-inch five-spoke alloys. These add to the rally-bred road car look of the standard model.

Subaru has been quite open about its efforts to make the new Impreza more appealing to more people – but don’t think it’s gone soft. This is a snarling performance car that would give the likes of the Porsche 911 a run for its money on a twisting B-road.