Ultimate version of performance legend is unleashed – and we deliver our verdict. 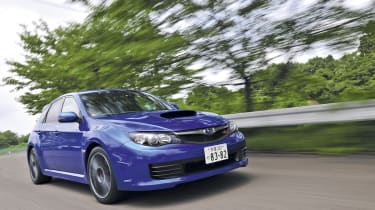 This is the Impreza STi that we think Subaru should have built right from the start! Its turbo and intercooler waterspray technology means the hot hatch is more responsive than ever, and also ensures that it can maintain maximum power even when driven really hard. On top of that, the new SI-Drive chassis and suspension set-up eradicates body roll and improves steering feel, to make the car less intimidating, and also delivers a more compliant ride.

Times have been hard for Subaru of late. The firm has pulled out of the World Rally Championship, and sales in showrooms have been tough.

Perhaps this all-new model – a significantly tuned and improved, limited-edition version of the standard Impreza STi – could provide a boost? It’s called the Spec C, and although company bosses don’t intend to bring it to UK dealers for the moment, the technology it showcases could make its way on to the fastest versions of the UK Impreza, and enhance the model’s already considerable driver appeal.

The fact that the Spec C has made it on to the road is a miracle in itself. Plans to produce it were nearly wiped out late last year, as top brass reacted to the economic crisis by tightening their belts. But it was decided Subaru needed to send a message to the world that it hadn’t forgotten its roots and knew what it excelled at.

Not that the newcomer shouts about its potential. The only features that set it apart from lesser Imprezas are a set of unique gold-coloured brake calipers and grippy Bridgestone Potenza RE070 tyres.

It’s what’s under the skin that really counts, though – and just a few moments behind the wheel are enough to highlight the Spec C’s phenomenal abilities. The car feels faster in every way than the standard STi – which is some achievement when you consider that it’s fitted with exactly the same 304bhp 2.0-litre boxer engine.

Firstly, there’s the handling. The car sits on Subaru’s new SI-Drive ‘intelligent’ chassis with the latest mechanical limited-slip differential at the rear. There’s also a revised suspension set-up with new dampers and springs, as well as a thicker rear anti-roll bar.

All this combines with the 18-inch alloys and those sticky tyres to solve the vagueness of the STi’s steering, and turn-in is much more precise as a result. Just as impressive is the fact that engineers have improved the handling while still retaining a comfortable, compliant ride – the set-up doesn’t try to bounce your eyeballs loose.

And then there is the straight-line pace…

The Spec C is 30kg lighter than the STi, tipping the scales at 1,475kg, so you’d expect it to be fast. But it’s the throttle response that stands out. A new ball-bearing turbo and intercooler waterspray device work together to transform the car’s power delivery.

The latter showers the intercooler constantly to reduce intake temperatures from 70 degrees Celsius to around 40 degrees Celsius. The result is that the engine retains the 25bhp that’s normally lost when it starts to suffer in the heat.

From behind the wheel, you can really feel the difference. The new car slashes nearly a second off the STi’s 0-62mph time, completing the benchmark sprint in only 4.3 seconds.

Not only that, but the Spec C also delivers more feedback, telling the driver exactly when they have reached the limits of adhesion. This makes it much more accessible to drive, and more entertaining, too.

Even better, in Japan the newcomer is being sold at a bargain price of £23,000 – although that would probably rise to around £30,000 if enough customers put pressure on Subaru UK to bring the Spec C to British showrooms.