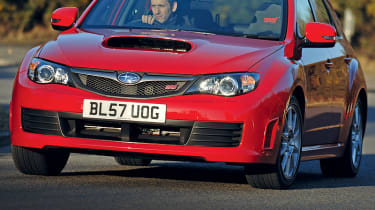 Driving Unlike the electronics and technology approach of some rivals, Subaru has stuck to tried-and-tested mechanical systems. The six-speed manual has a tight shift and weighty clutch, while the 4WD transmission uses limited-slip differentials front and rear, which allow torque to be distributed to the wheel that needs it most. That’s just as well, because the steering is a disappointment. Not only is it too light, but it’s not direct enough, so the nose is vague and agility suffers. But it is stable on rough roads, and absorbent, too. The long-travel suspension is softly set up and copes well with British B-roads, although it still fidgets over motorway expansion joints, and is rather noisy. Beneath the bonnet scoop lies a 296bhp 2.5-litre flat-four turbo, which growls characterfully and pulls well from low revs. The SI-Drive system alters engine mapping to vary throttle response as well.

Marketplace The fastest Impreza is a curious looking thing, with the curved bonnet and roofline giving it a rounded appearance. The gaping bonnet scoop is a direct link to Subaru’s rally heritage, and does serve a purpose, as it channels air into the engine’s intercooler. Flared arches are also functional as they widen the Impreza, promising to improve stability and grip. The single five-door model has few options – unlike the latest Mitsubishi Evo X, arguably its key rival, the Subaru doesn’t offer a self-shifting gearbox option. Other four-wheel-drive hatchback alternatives include the Audi S3 and Volkswagen Golf R32.

Owning The STI costs upwards of £25,000, but the interior design and material quality are no better than on a £10k supermini. Cheap plastics and flimsy trim abound, although it does get the basics right, offers excellent all-round visibility and has a decent amount of cabin stowage. There’s plenty of headroom throughout, and the five-door hatchback layout makes it versatile. Don’t trust the speedo, though. During testing, we found an indicated 70mph was actually a true 62mph. Average economy of 19.3mpg wasn’t too bad, considering the performance, but the Subaru does demand expensive super unleaded fuel. It is also very expensive to run – 20 pence for every mile when compared to an Audi S3! Insurance is steep and retained values are only average.