We drive the all-new Suzuki SX4 S-Cross, ahead of its arrival in UK showrooms in October 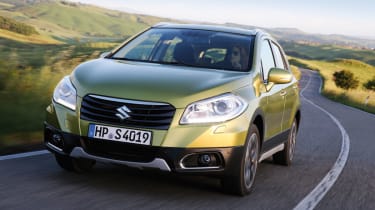 Crossover buyers have a wide range of demands, and the new SX4 will hold a lot of appeal for those who value practicality, low running costs and a generous standard spec. The firm ride could deter some family drivers, but the pay-off is tidy handling. The car is bigger than its rivals, and this front-driven diesel is expected to be much cheaper, too, and for that reason it deserves to be a hit.

Suzuki has its sights set on the Skoda Yeti and Nissan Qashqai with an all-new family-friendly crossover. The SX4 S-Cross shares part of its name with its predecessor, but sits on a brand new platform that’s a lot longer and lower than the current SX4’s, with a much wider track.

From the outside, the square rear light clusters and two-tone 17-inch wheels are very similar to those on Nissan’s big-selling n-tec models, but at the front the wide grille and bulbous bonnet inject a bit more individuality.

Every model gets off-road detailing and plastic underbody protection, while the SZ4-spec version we tried stood out even more thanks to its smart scuff plates and roof rails.

There’s a choice of 1.6-litre petrol or diesel engines, and two or four-wheel drive. Our front-wheel-drive diesel model is expected to account for the lion’s share of sales, thanks to road tax-friendly CO2 emissions of 110g/km.

The Fiat-sourced engine grumbles a bit on start-up and under heavy acceleration, but pulls strongly in-gear from just 1,500rpm – thanks to a healthy 320Nm of torque – before settling down to a reasonably refined cruise.

All the major controls feel nicely weighted: the steering is light but very accurate, and the six-speed manual gearbox has a slick, precise action. Throw the SX4 hard into corners and even this front-wheel-drive model provides a high level of grip and little in the way of body roll. But for a family car, the ride feels rather firm. Low-speed bumps thud through the cabin and bigger crests can bounce you around, too – so it may not fare too well on broken British tarmac.

Still, Suzuki is keen to point out that the new SX4 has been designed for buyers who need something bigger than an ordinary hatch – and it has some major advantages over its rivals in terms of practicality.

The boot offers a generous capacity of 430 litres, while the interior has been designed to maximise the available space. It feels quite narrow, but there is plenty of legroom in the rear. It’s just a shame the panoramic sunroof in the model we tried robbed back seat passengers of precious headroom.

Like any other Suzuki, the dash layout is unfussy and the interior seems robust. Key touch points like the multifunction steering wheel and gearknob have a quality feel, but lower down some of the materials look cheap – as do the blue-ringed dials.

With prices for petrol versions predicted to start from around £15,000, the SX4 S-Cross is a lot cheaper than its competitors. And the mid-range version we tried gets goodies like keyless entry, climate control and Bluetooth.

Combine that long equipment list with 67.3mpg economy (a match for the less powerful Skoda Yeti GreenLine), and the SX4 S-Cross looks like a real bargain.