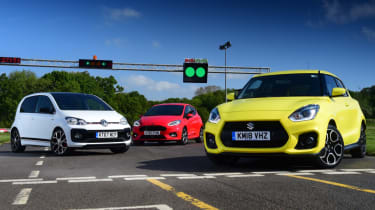 Anyone who has driven a go-kart knows that you don’t need a lot of horsepower to have loads of fun. Like those pint-sized racers, there is a new crop of small, cheap cars promising huge thrills.

The striking new Suzuki Swift Sport is completely overhauled from the previous model, with a new chassis, a new engine and loads of new technology on board. The previous version offered something a bit different to other supermini-based sporty hatches, with its revvy engine and low price point. This new car has a new turbo motor, plus a price hike; although for the first month, Suzuki is offering a discount.

That leaves it in limbo between two other pocket rockets: the new Volkswagen up! GTI and the Ford Fiesta, here in ST-Line guise with a 138bhp engine. The Fiesta is a known quantity, but this is the first time we’ve had the up! GTI on test.

With its peppy three-cylinder turbo engine and lightweight, well-packaged body, can the Volkswagen tempt buyers from superminis such as the Swift? We took this trio to Whilton Mill kart track to find out. 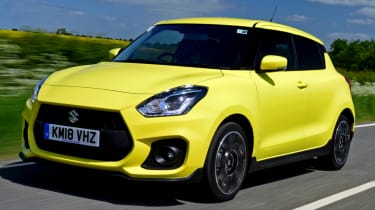 As with the standard Swift, the Sport is only available as a five-door. Suzuki has slashed the price from £17,999 to £16,499 for the first month of sales, so it sits right in between its two rivals in this test. Its striking Champion Yellow paint is a reference to Suzuki rally cars of the past, but is it a worthy replacement for its much-loved predecessor?

The Swift is the quickest car here by some margin because it weighs so little and its punchy 1.4-litre turbo petrol engine serves up 138bhp. It sprinted from 0-60mph in 7.9 seconds, more than a second ahead of both rivals. With the most torque here and the least weight to pull around, it was also quickest in the higher gears, taking 5.5 seconds to go from 50-70mph in fifth, which was a tenth ahead of the up! GTI and two seconds faster than the Fiesta. From 30-50mph in fourth, the Swift Sport matched the similarly lightweight up! GTI’s figure, with both beating the Fiesta. 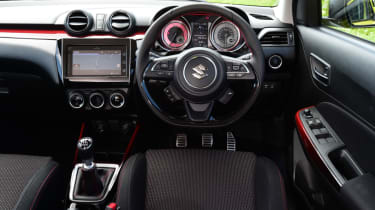 It’s disappointing that the four-cylinder petrol in the Suzuki lacks the character of its rivals’ three-cylinders. While the Swift is the fastest car of the bunch, it’s not that much fun in a straight line: the engine sounds dull and as maximum power is delivered at just 5,500rpm, it’s not very rewarding to stretch it past that. This is a pity given how much fun the old Swift’s naturally aspirated four-cylinder was to use.

However, it comes into its own on a twisty road. The steering is nicely weighted and the controls are all well matched for weight and response, which encourages you to make the most of the Swift’s decent level of grip. There’s not much mass to move around because it’s so light, so the Suzuki changes direction with ease, too.

The Swift also rides very well over rutted roads. It’s not quite as well sorted as the Fiesta on a faster road, but it’s the most comfortable car of the three around town and doesn’t drop into potholes too harshly.

On a challenging road with lots of turns, poor surfaces and no traffic, the Swift is more fun to drive – it’s just missing a crucial sense of humour found in the best hatches, like both rivals here.

“The Swift Sport is agile, but it’s not as adjustable and entertaining as the Fiesta ST-Line. It’s still good fun and better on the limit than the VW up! GTI, though.” 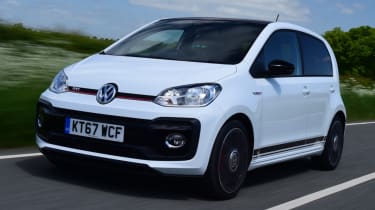 Even in GTI trim, the up! undercuts both of its rivals here by a big margin, costing £14,155 in five-door form. It uses a 113bhp 1.0-litre three-cylinder engine, and while it sits a class below both these competitors, it’s spacious enough to be worthy of a supermini buyer’s attention.

Despite being 25bhp down on the 138bhp 1.0-litre Fiesta here, the VW up! GTI was actually quite a bit quicker than its rival in our tests thanks to its low kerbweight. The Volkswagen wasn’t able to beat the lighter, more powerful Suzuki, but it put up a strong fight and actually eclipsed both rivals from 30-50mph in third gear, taking just 2.9 seconds.

It matched the Swift from 30-50mph in fourth (taking 4.0 seconds) and was only a tenth behind from 50-70mph in fifth (5.6 seconds). But it was a two-horse race here as both contenders left the Fiesta trailing by a big margin in all of our in-gear tests. 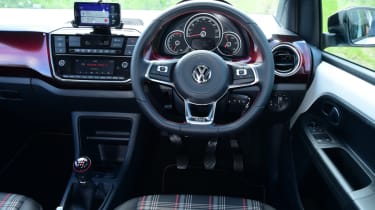 The Swift was the winner overall in the 0-60mph sprint, but the up! GTI came second with a time of 9.1 seconds, a tenth faster than the Ford. Its maximum power of 113bhp is produced lower down in the rev range than its rivals, so it’s easier and more accessible to extract performance on the road. The strong 200Nm torque figure at 2,000rpm means it feels really punchy at lower engine speeds.

The five-speed manual transmission has a mechanical feel, and is light and precise; it’s a joy to flick through the gears. This sense of precision extends to the steering, and while the up! chassis isn’t quite as capable as its rivals’, it’s still thrilling. The VW’s fun feel is added to by an entertaining engine note, which is artificially enhanced – but not to an irritating degree like on many hot hatches. Every time you hear this sound it’ll raise a smile, with the tiniest hint of a Porsche 911’s flat-six to the note.

The large 17-inch wheels on the up! GTI are the only real downside to this version. It doesn’t ride with the compliance of up! models on smaller wheels, crashing quite harshly into potholes and jiggling around too much at lower speeds. It’s the least comfortable of the three cars here, but only just – and it’s still perfectly acceptable for a hot hatch.

“The up! GTI’s appeal is more in its characterful engine and chassis than in numbers on a spec sheet. It’s great fun to drive and you can exploit its modest performance easily on public roads.” 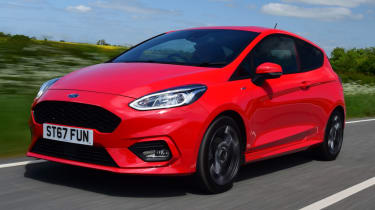 Although our pictures show a three-door car, here we’re testing a five-door version of the Ford Fiesta. Our 138bhp 1.0-litre petrol-engined model is the sportiest car in the regular Fiesta range until the ST arrives later this year – and especially so in ST-Line trim, which costs £18,615 in this form.

Even though it’s not branded as a hot hatch, the Fiesta will be a top choice if you’re a keen driver who appreciates a great-handling car. It has the best chassis of the three models here.

It’s much more agile and adjustable than either of its rivals, while still riding more comfortably than the other cars over rough and smooth roads alike. The damping is superbly set up to prevent body roll, but it’s not too harsh over bumps, even with the stiffer sports suspension in the ST-Line.

The steering is quick and precise, and as you load the Ford up into a corner it offers the most information as to what’s going on at the road surface. This doesn’t impact refinement too much, either, but brings the driving experience to life. There’s lots of grip through corners as well, so the Fiesta is great fun. 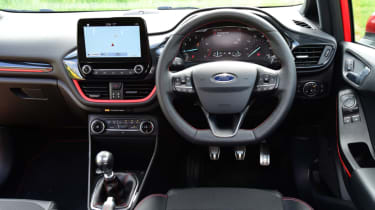 The six-speed gearbox isn’t quite as precise as its rivals’ here, but it has a more satisfying action than the VW’s slightly light-feeling movement. Also, the three-cylinder engine sounds more interesting than the dull unit in the Suzuki, although it’s not quite as characterful as the up! GTI’s motor.

Unfortunately the engine is a weak point for the Fiesta here; despite having 138bhp it feels slightly underpowered because it has to carry that extra mass, especially higher up in the rev range where it runs out of steam. It was the slowest car from 0-60mph and from 30-70mph through the gears, taking 9.2 seconds and 8.4 seconds respectively.

For the 0-60mph run, the Fiesta’s time was a tenth behind the 113bhp VW’s, and 1.3 seconds slower than the Suzuki’s. From 30-70mph going up the ratios it was four tenths behind the up!, which took 8.0 seconds, and 2.1 seconds behind the punchy Swift.

In each gear from 30-50mph and then 50-70mph it was significantly slower than its rivals, which was disappointing. The slightly lethargic performance is all that holds the Ford back in this test, though, because the handling is still the most entertaining.

“We’d pick a five-door Fiesta ST-Line over the three-door model you can see in our pictures. Access to the rear seats is much easier, so it adds lots of practicality for only an extra £650.” 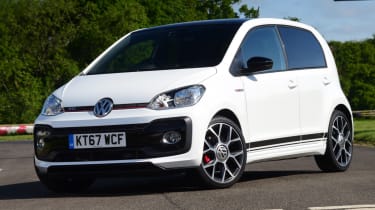 In this super-close finish, the Volkswagen up! GTI nudges just ahead of both of its rivals. Each is strong in a different area, but it’s the VW’s characterful, punchy and economical engine, as well as its low cost of ownership, that secures it victory in this test. It’s smaller than its rivals, but not by a huge amount. The bottom line is that it’s great fun and won’t break the bank. Read the full Volkswagen up! GTI review here. 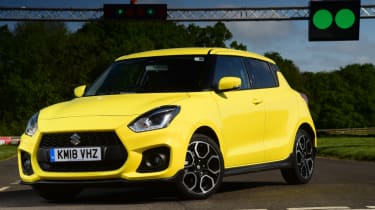 A recent price drop means the Swift manages second place in this test; at full list price it would be third here. It’s the fastest of the three by quite a margin, and it handles very well, riding and cornering nicely on British roads thanks in part to its ultra-low kerbweight. It’s a shame the engine is lacking fizz, but it is well equipped, so it beats the Fiesta here by a hair. Read the full Suzuki Swift Sport review here. 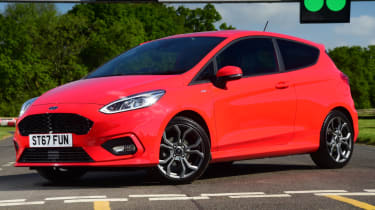 It's not often you’ll find a Fiesta in third place in a group test, but that proves how close this result is. The Ford handles beautifully: its balance of ride quality, grip and body control is the best of all three, and the control weights are spot on. It just doesn’t make sense in this form, though; the 138bhp engine isn’t worth the extra over cheaper, lower-powered variants. Read the full Ford Fiesta review here. 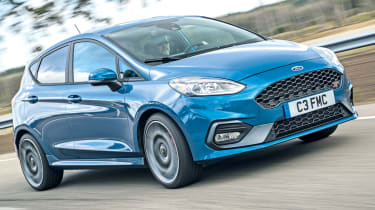 The ST-Line looks pricey next to what’s coming soon: the full-fat ST. Its punchy engine will solve the main issue we had with the ST-Line, and its price is only a little higher than the Swift’s once the offer ends.