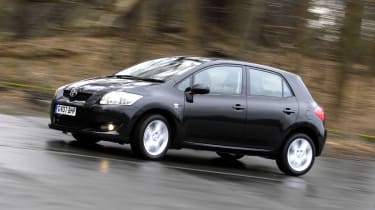 The T180 is the Auris flagship, but you wouldn't guess so from its sober looks. The practical Toyota hasn't shaken off its sensible shoes under the bonnet, either, with a torquey diesel engine rather than a high-performance petrol unit. Genuine hot hatch fans will be disappointed, yet the economical oil-burner delivers relaxed power, decent pace and low emissions. A safe and reliable buy - yet for nearly £19,000, we'd hoped for more.

When we look back at the new cars of 2007, what will be the highlights? There's a strong argument it could be the year of the hot hatch.

Established models such as the Ford Focus ST and Vauxhall Astra VXR are battling fresh models like the VW Golf GTI 30 and turbocharged Renault Mégane as never before.

Now, the list of contenders has grown even longer, with the arrival of a high-performance Auris. The T180 is the new flagship of the line-up - but, unlike many rivals, it uses a diesel, an impressive 2.2-litre, rather than a frenetic petrol turbo. The model hits showrooms this month, and as it boasts a huge 400Nm of torque, Auto Express was keen to see if the powerful oil-burner could quicken our pulses.

Surprisingly, Toyota has decided the standard Auris styling requires little modification for the T180. As a result, the most expensive model in the line-up is set apart from lesser cars by only a pair of smoked glass headlamps and some smart 17-inch alloy wheels.

As with the rest of the range, the car is best viewed head on, where the chunky front end gives an aggressive stance. On our test car, the attractive rims provided a striking contrast to the metallic black paint, but from just about every other angle (and without so much as a spoiler to help), the newcomer's looks won't excite. Neither will the practical cabin, which does without the neat design touches we've come to expect from rivals. Its special black trim does little to lift the mood, and the dash and instrumentation are unchanged. There is plenty of kit, though, with climate control, an electric sunroof and no less than nine airbags fitted as standard.

Buyers also get keyless entry, and the chrome-rimmed start/stop button will be familiar to anyone who's driven something from the current Lexus line-up. In addition, Toyota's luxury brand donates the high-quality column stalks.

As the styling and cabin are both largely unchanged, it falls to the engine and chassis to provide the spark - and, boasting 175bhp, the motor impresses. You cannot escape its diesel soundtrack under hard acceleration, but it makes a refined and relaxed motorway companion. With all that torque available from a mere 2,000rpm, the 0-62mph sprint takes only 8.1 seconds, but the car never pulls as strongly as the bare figures suggest it should. That is perhaps a result of the six-speed manual's long gearing, and the trade-off is excellent economy (45.6mpg) and low emissions (164g/km).

Toyota's engineers have tried to inject some sparkle to the handling, and the T180 gets a bespoke multi-link rear suspension set-up. It does a fine job of keeping the back in check, and grip levels at the front are also high, but there's still too much body roll under committed cornering for the T180 to be considered a proper hot hatch. This deters enthusiastic progress, and the over-light, artificial-feeling electric power-steering also isolates the driver from the fun.

Inherent Auris charms such as the spacious cabin, 354-litre boot and pre-dictably solid build will all appeal to buyers, and the brand's superb reliability and strong residuals strengthen the T180's case. Each is a highly desirable attribute, but as flagships go this is more cruise liner than battleship.