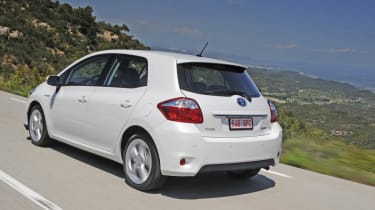 The HSD is the shining green star in Toyota’s compact family car range. It’s priced competitively against 2.0-litre diesel rivals, and offers a different hybrid proposition to the Prius, mainly because it looks like a normal car. Just like its stablemate, the Auris is great around town. But the familiar hybrid foibles remain, with a harsh note under acceleration and average economy. So on the motorway, good though the newcomer is, we’d still recommend a diesel instead.

Don't be fooled by the mild-mannered exterior – you’re looking at the automotive equivalent of Clark Kent, eco-warrior!

While Toyota’s Auris HSD might not turn many heads on the high street, its hybrid powertrain promises to revolutionise family motoring with some super-low running costs. Auto Express took a drive to find out if the VW Golf-sized hybrid lives up to its claims.

The Auris, which shares the same Hybrid Synergy Drive system as the larger Prius, needed only a few tweaks to incorporate its nickel metal hydride battery, creating the first mass-produced compact family hybrid in the process. Backing up its eco credentials is the fact that, unlike the Prius, the Auris HSD is not shipped here from Japan, but instead is built at Toyota’s UK plant in Burnaston, Derbyshire.

Changes include LED daytime running lights, a new grille, more aero-efficient front bumper and a larger tailgate-mounted spoiler. There’s a choice of 15 or 17-inch alloys, too. The former results in 74.3mpg and CO2 emissions of 89g/km, thanks in part to Michelin low-rolling-resistance tyres.

However, the vast majority of the 30,000 Auris HSDs which Toyota expects to sell in the UK every year will get the larger rims, as seen on our test car. But while these do compromise economy – 70.6mpg and 93g/km – both sizes still qualify for road tax exemption. All models are lowered 5mm for better aerodynamics, too.

Inside, the rev counter has been replaced with a special gauge which shows whether the car is regenerating power, using electricity or calling on the engine’s extra reserves. There’s also a revised centre console which features the same gearknob as the Prius, plus buttons to manually select electric-only, Eco or Power modes and operate the electric handbrake. The boot isn’t too badly compromised by the addition of the battery. It’s obviously smaller but there’s still enough space to accommodate bags of shopping, while the rear seats fold to take larger items.

Pressing the starter button results in nothing other than illuminating the dash. Put thecar in Drive, though, and it moves off virtually silently, with only a muted whirr from the electric motor entering the cabin.

Around town, good visibility makes negotiating busy streets easy. Toyota claims that the car will travel 1.2 miles in electric-only mode, and the quiet, fuss-free way it does this makes city driving relaxing. The only caveat is that pedestrians are often caught out as they can’t hear you coming.

On the motorway, the HSD is a refined, comfortable cruiser – but don’t expect diesel-like fuel economy. And as a mainstream Golf competitor, the Auris needs to be able to deal with all types of roads, too.

On inclines the motor needs plenty of throttle to move the car’s 1,380kg weight, which results in a thrashy engine note as the unit powers through the CVT gearbox, and on twisty roads the handling is imprecise with a lot of body roll. Around town, the Auris is in its element. Its quiet and refined drivetrain beats that of a conventional diesel.

Ultimately, though, this hybrid is bland to look at, and out of town the harsh engine noise and poor handling negate its appeal as a true mass-market contender. It’s a better everyday car than the Prius, yet lacks the classless quality and all-round ability of the Golf.

Rival: VW Golf BlueMotion WITH a few eco tweaks, VW has created a Golf that’s just as clean as the Auris. More significantly, it brings virtually zero compromise to cleaning up your act. As a mainstream all-purpose car, the Golf beats the Auris hands down.