After two petrol Auris models, we've moved on to a clever hybrid... 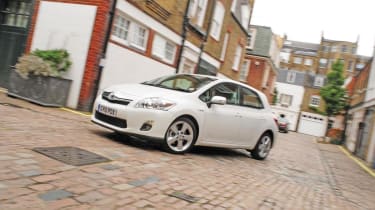 I’m having to get used to being the centre of attention behind the wheel. You see, my previous two Toyota Auris long-termers were refined and dependable, but their bland styling and fuss-free characters made them invisible to passengers and other road users. However, their hi-tech hybrid replacement is attracting interest wherever it goes.

Underneath the subtly altered body is the petrol/electric unit from Toyota’s pioneering Prius. The Japanese firm’s Hybrid Synergy Drive (HSD) has been around in one form or another for nearly 10 years, but people are still fascinated by its capabilities.

At a recent family gathering, I had a queue of curious relatives all wanting to take a ride in the new Auris! So, how does it perform? One of GV10 PDX’s first tasks when it arrived on our fleet was a motorway dash to Heathrow Airport, where I picked up my daughter from a trip to the USA.

On such fast roads, the HSD feels much the same as my previous Auris models, serving up strong refinement and comfort. The shift-free CVT transmission offers smooth progress, although it can hold engine revs intrusively high when accelerating quickly.

In town, however, the Toyota is a very different beast. Here you can really make use of the electric motor, which will allow you to travel in eerie silence using battery power alone. A neat dash display shows you what part of the hybrid system is working and whether the powerful cells mounted underneath the boot floor are being recharged. If you’re smooth and gentle with the accelerator, it’s possible to travel for around a mile before the petrol powerplant cuts in to boost the batteries.

Driving like this soon becomes addictive, and on every trip I challenge myself to go further before the engine fires up. It appears my fuel-saving approach is paying off, because the HSD has so far returned an excellent 45.4mpg at the pumps – a vast improvement over the 26-28mpg achieved by its petrol predecessors in their first reports.

And that’s not the only financial saving I’m making. Thanks to its hybrid engine, the Auris is exempt from the London Congestion Charge, meaning I avoid the £8 outlay on my daily commute into the capital. Also, CO2 emissions of 93g/km result in a free tax disc, too! In other aspects, the Toyota is very similar to its predecessors. The well built cabin still has the same irritating high-set centre console and uninspiring design. Yet while the load bay is smaller to accommodate the bulky battery pack, there’s still ample space.

It’s early days, but I’m very impressed with Auris HSD – I’m even starting to enjoy the quirky way it drives, particularly around town. Who knows, I might even get used to all the extra attention!

“By targeting traditional diesel hatches, Toyota’s been bold with its hybrid Auris. The result is a mixed bag, but the petrol/electric car isn’t without appeal – a short and silent trip around town will convince many. Now let’s see if we can match the firm’s 74.3mpg claims.”James Disdale, road tester