Quiet, refined and comfortable – that describes the Avensis. It's certainly not a thrilling drive 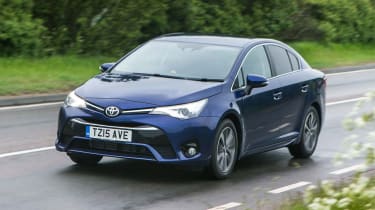 Toyota’s 2015 facelift didn’t just tweak the car’s aesthetics – the Japanese car maker also made changes to the noise isolation and suspension. While it did improve the way the Avensis handles, it’s still someway off the class leaders for driver enjoyment. Lifeless steering means it’s beaten by both the Mazda 6 and Volkswagen Passat in the corners, and even the now more grown-up Ford Mondeo is more fun to drive.

That said, the Avensis is comfortable and quiet on the motorway, making it a solid choice if you spend a lot of time trawling up and down the country. The soft suspension makes light work of lumps and bumps, with only the biggest potholes tending to send jolts through the cabin.

Overall, the Avensis is a safe, refined and comfortable car to travel in. While this is all some buyers will ever need, it's just that the Avensis' nearest rivals manage to do this as well as adding a bit of fun to the whole driving experience.

In terms of engines, the diesels make the most sense; they're refined and offer the best mix of economy and performance.

Potential buyers would be better staying away from the 1.8-litre petrol and instead going for one of the diesels. Not only will diesel power appeal more when it comes to part-exchange time, but the petrol is a bit of a lacklustre engine.

The six-speend manual is the best gearbox too, so unless you really need a self-shifter, we wouldn’t bother with the CVT Multidrive S box.