All-new Toyota Aygo 2014 looks great, is comfortable to drive and affordable to run 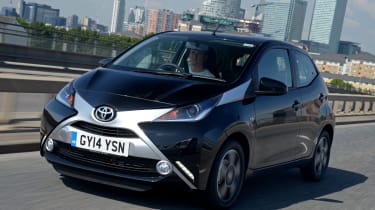 Our first taste of the Aygo in the UK confirms there are enough welcome improvements to offset the fact that it’s not truly engaging to drive. It’s comfortable enough, and better mannered at motorway speeds now. Plus, thoughtful aerodynamics and a 60kg weight saving should ensure that it’s pretty affordable to run too.

Don't be lulled into thinking that because the Toyota Aygo has to share its platform and interior with the Peugeot 108 and Citroen C1, and its engine is related to the old Aygo’s, that the end result is a compromise.

The new styling is anything but,with the striking ‘X’ that dominates the front of the Aygo available in an array of colours to capitalise on the trend for personalisation.

Toyota is also keen to highlight the less bug-eyed, angular headlights with projector lenses and standard LED running lights. In the metal, the new Aygo is not as cute as before – more masculine, even – but once again, it’s the most distinctive of the French-Japanese trio. No other city car drips with so much sheer attitude. There’s lots of aerodynamic attention to detail hidden in the bold looks, too: a double-bubble roof, fins in the rear lights and a front splitter all help to maximise efficiency and make life as easy as possible for the only engine option available. 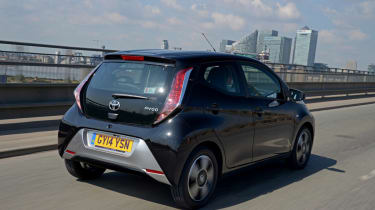 It’s another 1.0-litre three-cylinder non-turbo unit, but it shares only its block with the outgoing car, and weighs in at just 69kg. It has one bhp more, at 69bhp, but it’s fed through a revised five-speed manual gearbox with new ratios for greater refinement and economy. Toyota claims figures of 68.9mpg and 95g/km of CO2 – 3.2mpg and 4g/km better than before.

That gearbox – although topped with a more pleasant lever than the ugly old one – is one of the only real causes for complaint. The gearchange is short and baggy – not ideal in the urban cut-and-thrust. However, the car does feel nippier than before, thanks to a 60kg weight saving over the outgoing model.

Inside, the new Aygo is much more sophisticated, with less exposed metalwork and materials that are more pleasant to the touch. Our test car was a top-spec ‘x-clusiv’ model, which sits above x-cite, x-pression, x-play and x-trim. Our manual five-door model comes with a price tag of £11,695. 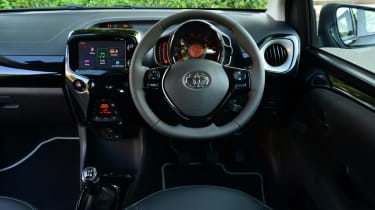 Tactile steering wheel controls and a seven-inch touchscreen are standard on all but the basic ‘x’ model. Although it doesn’t include sat-nav (a £395 option), it’s crammed with tech including constantly updated fuel consumption graphs, digital radio and a crystal-clear reversing camera on high-spec models.

The new car is also quieter at a motorway cruise. Less wind and road noise is a welcome bonus, but there’s still enough of a cheery thrum when revved. However, if you’re after the last word in city car quality, with refinement and a dollop of driver fun thrown in, the Volkswagen up!, and its sister cars, the cheaper Skoda Citigo and SEAT Mii, are still going to be the ones to beat.

Alloy wheels – another customisable option for the new Aygo – are up a size from 14 to 15 inches, but that’s not spoiled the ride on UK roads. On our test drive the Aygo remained largely composed, refusing to transmit any kickback through the flat-bottomed steering wheel. The car has been delivered to focus on comfort, so there’s not a great deal of entertainment to be had from behind the wheel. But Toyota is banking on the fun to be had with the accessories brochure instead.