Our full verdict on the revised SUV with updated 2.0-litre D-4D engine 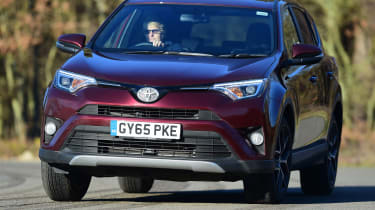 Even with this refresh, the Toyota RAV4 remains a car you’d buy with your head rather than your heart. It’s competent, efficient, spacious and better looking than before, but unlike the engaging Mazda CX-5 and distinctive Renault Kadjar, this SUV leaves you slightly cold thanks to its uninspiring cabin and merely average dynamics. Still, it will continue to appeal as a sensible, reliable and roomy choice in this class.

The Toyota RAV4 is often credited with having created the compact crossover market. The fourth-generation model has just been revamped for 2016, and the range now includes a petrol-electric hybrid model. However, most will plump for a more conventional diesel, so what's it like?

The brand has removed the ropey old 2.2-litre D-4D engine from the lineup, leaving just the 2.0-litre to fill the gap. To do this, Toyota's upped the power from 124bhp to 141bhp. It’s not much, but it’s enough to match the 2.2’s 0-62mph sprint time of 9.6 seconds. The engine has adequate low-down grunt; it just never feels fast. Revving doesn’t add much pace and it becomes vocal.

It’s better at a cruise, but a Mazda CX-5 diesel is a lot more refined, smoother and quicker. At least the Toyota’s official economy figure of 60.1mpg is competitive – and over 10mpg better than the 2.2-litre’s. 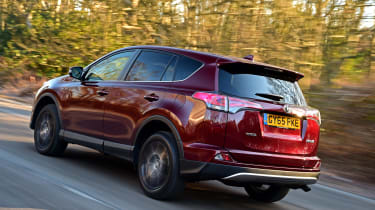 The RAV4 is decent to drive. Although the ride is firm in town, there’s plenty of grip and body roll is kept in check. It’s capable enough, but a CX-5 is more involving and a Renault Kadjar more cosseting. Wind noise is noticeable at motorway speeds, too.

The fresh exterior look – in particular the sharp front end – helps the Toyota appear less generic than before. However, it’s best described as ‘functional’ inside; while everything is solid to the touch, it’s dark and uninspiring to look at. Our mid-spec Icon model has smart metal-effect trim and a leather-look dash panel, although it’s not going to win any awards for design. 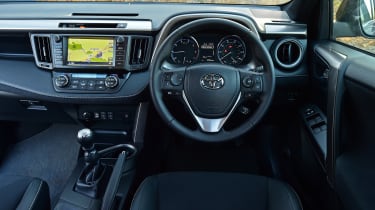 You get lots of kit as standard, including sat-nav, LED headlights, dual-zone climate control and an electric bootlid. Buyers will also appreciate the space on offer, as the RAV4 is one of the biggest cars in its class. There’s loads of room for four adults and five at a push, while the boot is big enough and has a very low loading lip.