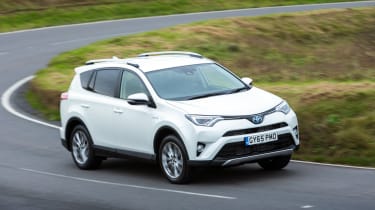 Unless you’re a die-hard hybrid fan or need to save a few pounds on your Benefit in Kind bills, then the conventional diesel RAV4 makes more sense than the petrol-electric model. It doesn’t drive as well, while its powerplant hurts refinement and tech trails that of more modern plug-in rivals. The claimed efficiency figures look good, but you’ll struggle to match them in the real world. Plus, at £30,795, this Excel- spec model is expensive.

Few manufacturers have the hybrid history of Toyota, which launched its first petrol-electric Prius back in 1997. Since then, the brand has slowly rolled the tech out across its range, meaning it’s now possible to drive a dual-fuel version of the Yaris supermini, Auris hatchback and, of course, the recently launched Mk4 Prius. However, this is the first time Toyota has given its rugged RAV4 SUV the hybrid treatment.

Sister firm Lexus donates the drivetrain from its NX 300h, meaning the RAV4 gets a 2.5-litre four-cylinder petrol engine, electric motor, continuously variable automatic transmission and a relatively old-fashioned nickel metal hydride battery pack. Entry-level Business Edition models are front-wheel drive, yet all other versions feature an extra electric motor connected to the back axle to deliver four-wheel drive. Yet while the technology isn’t exactly cutting edge, the Toyota’s figures look good. For instance, our flagship four-wheel-drive Excel car claims 55.4mpg economy and CO2 emissions of 118g/km. But is the on-road reality a match for the on-paper promise? 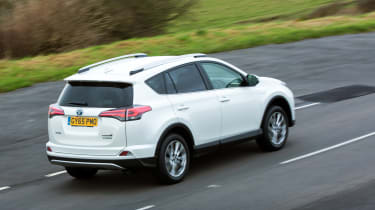 Prod the RAV4’s starter button, and the dashboard lights and instruments burst into life with no engine sound coming from under the bonnet. Gently squeeze the throttle, and the Toyota moves silently away on battery power alone. It will maintain this neat trick for around a mile at speeds of up to 40mph, before the petrol engine fires. At this point, the electric motor is there to provide extra muscle until the battery regains its charge.

That’s the theory, anyway. Accelerate hard, and you very rarely feel the electrical assistance; instead, the CVT gearbox sends the engine revs soaring, which results in an unpleasant, coarse racket in the cabin. And while Toyota says the RAV4 delivers 195bhp and will cover 0-62mph in 8.4 seconds, it never feels as fast as those figures suggest. 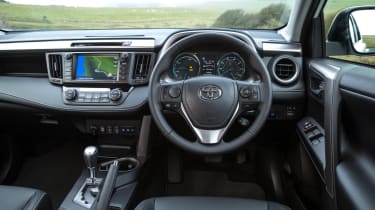 This can partly be explained by the car’s hefty 1,785kg kerbweight, which is 175kg heavier than the equivalent petrol model. You can feel this extra mass through a series of corners, too. Where the petrol and diesel-engined RAV4s are surprisingly poised and agile, the hybrid feels ponderous and quickly runs out of grip. The ride isn’t as composed as the conventional versions’, either, and it crashes into potholes and jolts uncomfortably over sharp ridges.

At least the rest of the car benefits from the same updates as the standard RAV4, so you get sharper styling, tweaked instruments and more standard kit. It’s still not as stylish or upmarket as models such as the Renault Kadjar, but it does benefit from a roomy interior, large boot and a generous five-year warranty.