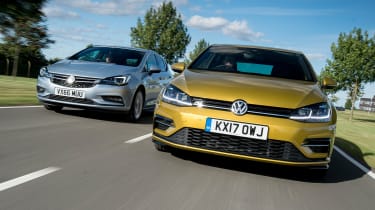 As the petrol vs diesel debate continues, the tide is turning towards the former in the family hatch class. We know how good Volkswagen’s new Golf Mk7.5 is in downsized 1.0 TSI turbo petrol form because it won the Best Compact Family Car crown at our recent New Car Awards, but what if you want a bit more performance without sacrificing usability?

For the past decade, diesel power has catered for this niche of the market, but with VW’s new 1.5 TSI Evo engine in our favourite family car, there’s a petrol-powered alternative. Volkswagen’s five-door hatch and new drivetrain combine performance, refinement and economy; however, so does the Vauxhall Astra in 1.4-litre turbocharged petrol form.

• The best hatchbacks on sale

Both cars boast the same 148bhp output, front-wheel drive and a six-speed manual gearbox, but which is the better combination? Read on as we deliver our verdict. 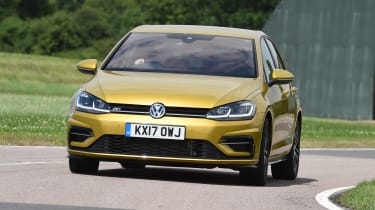 Alongside the 1.0-litre TSI turbocharged triple, this new 1.5-litre four-cylinder TSI EVO engine is part of Volkswagen’s new powertrain offensive and a concerted push towards petrol in the wake of the Dieselgate emissions scandal.

It replaces the old 1.4 TSI petrol unit, but boasts the same power output of 148bhp. It feels strong as well, thanks to its maximum 250Nm of torque from as low as 1,500rpm. In a car weighing 1,294kg, it gives a good deal of flexibility, as the VW pulls strongly from the bottom end. 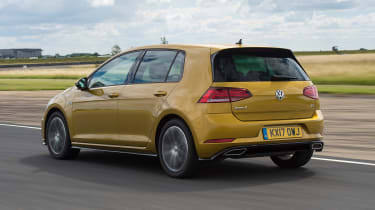 It was quicker than the Astra from 50 to 70mph in top gear, completing this acceleration test in 8.7 seconds compared with 9.2 seconds for the Vauxhall. The difference is partly because the Astra’s 245Nm comes in slightly higher than the Volkswagen’s, at 2,000rpm, so once the 1.4 turbo engine drops off the boost it takes longer for it to pick up and get into its stride.

In the lower gears, where the Vauxhall’s revs were higher, the Astra was faster than the Golf. The VW accelerated between 30 and 50mph in third and fourth gears in 4.2 and 5.5 seconds respectively, whereas the Astra needed only 3.9 and 5.4 seconds for the same test.

Torrential conditions during our track assessments meant that the Astra in particular didn’t get near its claimed acceleration time off the line, but the VW’s 8.4-second 0-60mph time in the rain was still respectable. Traction even in the wet was okay once the car was rolling, while the six-speed manual’s swift, positive shift action meant you could rush through the ratios quickly.

The Golf has more grip than the Astra and boasts sharper, more precise steering as a result – a trait of the car’s MQB underpinnings. 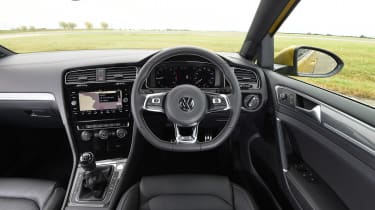 The damping is firmer and the VW’s body control is tauter than the Vauxhall’s. Combined with the lowered sports suspension set-up, on our test car’s 17-inch wheels the Golf drops into bumps with a slightly harsher edge than the softer, but slightly more loosely controlled Astra. It’s still very composed, but you feel more vibration through the road as a result of its increased driver focus.

There’s no sacrifice when it comes to the Golf’s practicality, but you don’t get as much equipment with the Volkswagen as in the Astra. GT-spec Golfs feature sat-nav, adaptive cruise and some neat ambient interior lighting as standard, but climate control is a £415 extra. Leather upholstery will cost you an additional £1,900 and LED headlights will set you back a further £975. 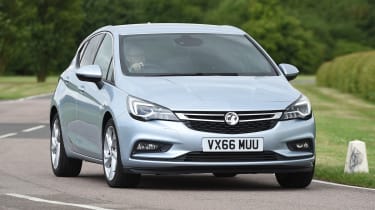 This seventh-generation Astra proved a big step for Vauxhall, bringing the famous nameplate bang up to date. It’s a genuine rival for the Golf, with a range that includes ultra-efficient diesels and sportier petrol models. However, this 1.4-litre turbocharged version has a foot in both camps.

The Astra trailed the Golf by two tenths of a second in the sprint from 0-60mph, taking 8.6 seconds in total. Its engine feels strong, but it’s the six-speed manual’s woollier shift action that partly explains the deficit against the VW. 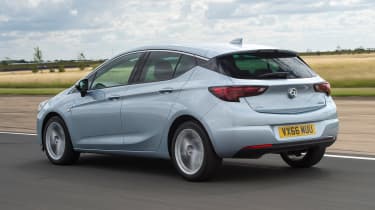 It doesn’t feel as mechanically rewarding as the Volkswagen, and you have to be smoother with your changes, but leave the Astra in gear and the pull on offer is a match for the 1.5 TSI EVO.

Even though it produces 5Nm less torque, the Vauxhall was faster than the Golf from 30 to 50mph. However, that torque is produced 500rpm higher, at 2,000rpm, so it was slower than the Golf between 50 and 70mph in fifth and sixth. The gap wasn’t big because the Astra’s engine is still flexible.

It doesn’t corner as flat as the Golf does, but the take-up in the Astra’s dampers means it’s the more comfortable option on the road. It’s softer, but whereas the VW jiggles around a little on its 17-inch wheels and lowered sports suspension, body movements in the Vauxhall hatchback are less pronounced and more fluid.

This looser body control means there’s a little more roll in corners, while the Vauxhall’s steering is more vague than the VW’s, but it ensures passengers are less upset on the move.

Thanks to this softer edge to the ride and its relatively hushed engine, the Astra is nicely refined on the road, with less tyre noise than the Golf.

For the price, the top-spec £21,555 Elite Nav model gets lots of equipment, with satellite navigation, Apple CarPlay, Android Auto and OnStar as part of the larger eight-inch touchscreen infotainment system, which matches the size of the unit fitted as standard to the Golf. 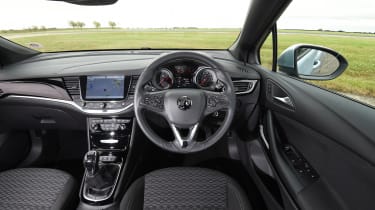 Heated leather seats and a heated steering wheel, climate control, cruise control and two USB ports in the rear are all included, topping the GT trim level on the Golf for equipment and also undercutting it on price.

But while you get a lot more kit for your money with the Vauxhall, the quality isn’t quite as good as you’ll find with the Volkswagen.  There’s more hard plastic in the Astra and the interior ergonomics aren’t quite as logical as in the Golf’s cabin, but these are minor points in an otherwise well equipped and practical package. 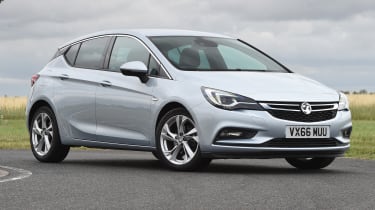 The Astra’s affordability means it just edges ahead of the Golf. It might not be quite as responsive to drive, but the Vauxhall is more comfortable, nicely refined and delivers enough practicality for a family. It’ll also be cheaper to run and boasts some neat tech and lots of kit, so it’s a worthy winner. 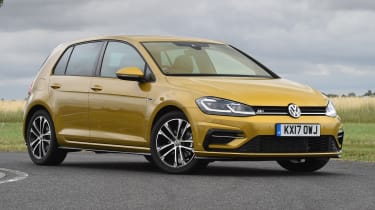 The Golf is a great family hatch, but the range sweet spot is the 1.0 TSI and not this larger 1.5 EVO unit. Due to the limited trim range, the price is high, so the Astra gets more kit for less cash. The VW is grippier and more fun to drive, but the Vauxhall is comfier and will cost you less to run.